Abilities:
Regen (I-III)
The Mysidian Rabbit is a fire-elemental Eidolon that appears in Final Fantasy Dimensions II. It is an optional summon that can be obtained as a signet for Aemo as a first-time completion reward for the "Forest Ravagers" side quest in Present Navos Forest.

The signet teaches Aemo Regen abilities, which can be useful in providing extra healing to the party in the opening stages of the game. However, aside from its usefulness in the opening chapters of the game, the Mysidian Rabbit signet is considerably weak.

Similar to its other appearances in the series, the Mysidian Rabbit is named after the recurring mage town Mysidia and is dressed in standard Black Mage attire.

Aemo learns the following abilities from the Mysidian Rabbit:

In the original free-to-play versions, the Mysidian Rabbit was a god-tier fire signet that could be equipped by all party members. It could only be obtained through participating in the "Moonlight Legends" event in Final Fantasy Legends: Toki no Suishō. Unlike regular god-tier signets that required god stones to evolve, the Mysidian Rabbit's signet could only be evolved by using a specific number of Moonlight Dumplings obtained during the event. It had a max rank of 8 and allowed the wielder to use Thumpty Fire I-IV abilities.  In the premium versions, the Thumpty Fire abilities were removed and the signet taught Regen abilities instead. 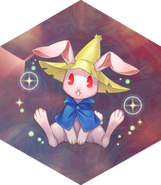 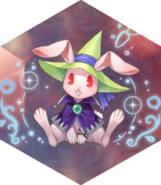 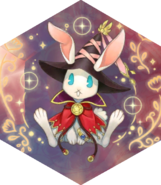