Mysidian Rabbit (Lagomorph in early English releases) appears as one of Setzer's Slot abilities whenever he loses a combination. Its Spell Power is 10, and it restores a small amount of HP as well as removes the Blind, Poison and Sleep status effects. It does not ignore Magic Defense, characters with a high Magic Defense stat are healed for less. It also does not damage the undead.

In the Level 70 Ninja job quest, Hanzo was tricked by Karasu to perform the forbidden mudra with a fake mudra scroll, thus making him summon a bunch of Dread Beasts instead. 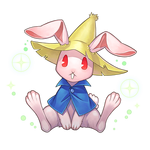 The Mysidian Rabbit is a fire-elemental Eidolon for Aemo. It teaches her Regen abilities and uses the Life Blessing summon attack when summoned into battle.

[view · edit · purge]Lagomorph is a word for the order of animals to which rabbits and hares belong.