Mysidia... the place where all this madness began.

Mysidia is a town in Final Fantasy IV and Final Fantasy IV: The After Years. Mysidia is inhabited by wizards, and is ruled by an Elder. It is the hometown of Palom and Porom, and is one end of the Devil's Road, which connects Baron and Mysidia. The Tower of Prayers is located in Mysidia, and is where the Elder prays for those he cares about.

According to the Settei Shiryuu Hen guide book, it was founded by the Sage Mingwu (alluding to Minwu from Final Fantasy II), who drifted ashore 500 years before the events of Final Fantasy IV, although this idea has seemingly since been discarded. Practicing magic was initially a benevolent hobby accessible to everybody, but people became corrupted by power and competition. Mingwu was enraged and sealed away magic, and the Old Age of Magic came to an end. He later restored magic but made it so that only certain persons could use it, and this became the start of the New Age of Magic.

In the English localization of the 3D version, Mysidia is pronounced [mɨ̞ˈsɪ.di.ə].

The Dark Knight Cecil raids Mysidia with the Red Wings airship fleet to steal the Water Crystal for the King of Baron. The Mysidians are helpless and put up no resistance, but are nevertheless slaughtered in great numbers by the attackers. Later Cecil washes ashore near Mysidia after being attacked by Leviathan, but the inhabitants of Mysidia, unforgiving of his actions, cast spells on him such as Toad, Pig, and Poison when he returns.

Cecil visits the Elder and explains he was banished from Baron and is fighting Golbez. The Elder says Cecil cannot defeat him using his Dark Sword, and that he must travel to Mount Ordeals and become a Paladin. The Elder sends Palom and Porom to help and keep an eye on him.

Cecil returns as Paladin wielding the Mythgraven Blade. The Elder reveals the sword is passed down in the Mysidian Legend and says Cecil is the Chosen One, and must defeat Golbez. He opens the Devil's Road so Cecil can get to Baron.

Cecil returns after Golbez has gathered all the Crystals. He is invited to pray with the Elder in the Tower of Prayers, and their prayers are answered with the Lunar Whale, the airship that can travel to the Red Moon. After the Giant of Babil is destroyed, the Elder, Palom, Porom, Yang, Edward, Cid, King Giott, Luca, and others pray for Cecil to defeat Zemus on the moon.

In the beginning of The After Years the Second Battle of Mysidia takes place. The Maenads seize the Water Crystal using hordes of monsters to storm the city from the Devil's Road, outmatching Mysidia's Mage Army. The Elder himself is wounded in the battle.

In Edge's Tale, Edge sends Tsukinowa to spy on Mysidia and gather information as a magic trainee named "Lapin". Tsukinowa spies on Porom and follows her to Mt. Ordeals, returning to Edge when he sees the Tower of Babil glowing ominously.

In The Crystals, Rydia, Luca, Edge and the Man in Black come to Mysidia and engage Ramuh to rescue Porom and the village from his wrath.

The item shop is on the east side of town. This is the first shop in the storyline to sell Hi-Potions.

The weapon shop is one of two buildings on the west side of town, the other being the armor shop. Cecil cannot use any of the goods sold here until he becomes a paladin.

The armor shop is next door to the weapon shop. As with the weapon shop, it sells goods that are useless to Cecil as a dark knight, and are only available to him once he becomes a paladin. A black mage in the shop will tell the player of this scornfully, and be shocked if Cecil then addresses him as a paladin.

The building is the first structure on the east side of the town. The pub is found in the first floor and the town inn on the second. The black mage on the counter will poison Cecil's drink, and the dancing girl is an old mage in disguise, who will transform Cecil into a pig and kick him out of the pub. This will happen even after Cecil becomes a paladin.

The Devil's Road is on the far east side of town, providing instant teleportation between Mysidia and Baron, but has been deactivated since Baron's attack and theft of Mysidia's crystal, only activating again once Cecil returns from Mount Ordeals as a paladin. Traveling the road requires great vitality and is not to be taken lightly; however, a paladin could easily travel it with no concerns.

The Hall of Prayer is the building farthest north of the town. When Cecil enters the hall, the Elder will tell him to become a paladin on Mount Ordeals, and sends Palom and Porom with Cecil as spies. After Cecil returns a paladin with Tellah, the Elder will warn the old mage about Meteor's destructive power.

It is just upstairs the Hall of Prayer. The crystal room is first shown in the cutscene when Cecil raids Mysidia. If the player visits it, the dais will be empty. Upstairs the crystal chamber leads to the Tower of Prayers.

The Tower of Prayers is accessible from the door farthest north in the crystal chamber. If the player visits the elder before Mount Ordeals, the elder and mages will say that they are praying for him and the whole world. After Palom and Porom's sacrifice, the elder will give the player augments (3D version only). After the events of the Sealed Cave, the player must head here, where the elder is praying along with some mages for the Lunar Whale to appear. After the events of the Giant of Babil, the whole party is present in the tower, and will offer Cecil's group words of encouragement. When they sense that Cecil and others are in danger, they pray harder.

The Tower of Prayers was renamed the Tower of Wishes in the original North American SNES version due to Nintendo of America's censorship policy on religious imagery.

In Town
Note: All these encounters are scripted.

Mysidia's theme, "Mystic Mysidia", features some peculiar elements not found in many town themes throughout the series. Its fast tempo and the inclusion of a cuckoo bird's chirp within the rhythmic section are but a few of these. A rearranged version of the theme was included in Final Fantasy IV: Celtic Moon album.

One of the original servers was named Mysidia. It was merged with the Istory server into the Gungnir server.

The town alludes to a town of the same name in Final Fantasy II.

The flag of Mysidia is featured on the cold cast statue of Cecil's confrontation with the Dark Knight. 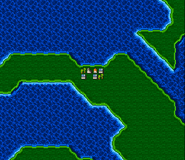 Mysidia on the world map (SNES).

Mysidia on the world map (PSP). 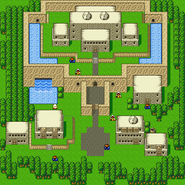 Map of the outers of Mysidia (DS/iOS).

Mysidia on the world map in Final Fantasy IV: The After Years (Wii).

Mysidia in The After Years for Final Fantasy IV: The Complete Collection.

Mysidia's Tower of Prayers in the Complete Collection version.

The Tower of Prayers (DS/iOS).

The whole party in the Tower of Prayers (DS/iOS).

Render of a white mage (DS/iOS).