West:
Outside before Cyclone:
Outside after Cyclone:

Fearing that tremendous power they wielded might lead the world to destruction, the mages of old founded a settlement in Mysidia and dwelt there in seclusion.

Mysidia is a town populated almost entirely by mages in Final Fantasy II. It is located far to the south of Altair, across a river, and is central to Firion's quest to obtain the Ultima Tome. The spell itself is located in the Mysidian Tower, situated on a nearby island.

A bookshelf can be found in a house in the southwestern part of the town. If the player uses a storyline key term (with exception of Wild Rose, Dreadnought, Ekmet Teloess and Cyclone) on it, it will give information about the term.

After the liberation of Fynn from Gottos, Princess Hilda and Gordon took command of Fynn. They decide to obtain Ultima to continue their resistance against the Palamecian Empire. To do this, Firion and his party must collect the White Mask and Black Mask to break the seal to the Cave of Mysidia, which lies to the southeast.

Later, after obtaining the White Mask hidden in the dungeons of Fynn Castle, Firion heads to Mysidia so as to leave the mask on the face of the goddess statue beneath the town.

Outside, before Cyclone[edit | edit source]

Outside, after Cyclone[edit | edit source] 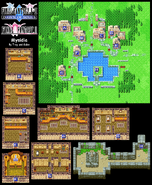 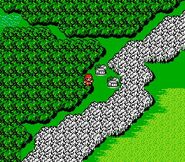 Mysidia on the World Map (NES). 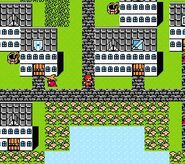 Mysidia on the World Map (PS).

Mysidia on the World Map (GBA).