Mysidia is a small town in Chocobo Racing, populated by mages. The Floating Gardens course is situated nearby and is the residence of White Mage. During Story Mode, Black Magician leads Chocobo and friends to the town. Tired from their journey, they ask White Mage to heal them. She sees the blue crystal shards that each of them carries and offers to tell them the legend of Magicite if they beat her in a race.

The racing course in Mysidia takes place in the sky among clouds and rainbows. The course starts on a clear road with various sharp turns. It is safe to travel along the walls as long as the racers do not drift all the way to the edge. The next portion takes the racers along a dirt road that contains one small hill after another and, unlike the previous portion of the course, the walls are not safe to travel against.

As the racers travel along the road they are forced to make a few sharp turns, and there is a small bump the racers must pass through halfway. After making these turns the road goes clear and is straight until coming up to the finish line. Throughout the stage the background features clouds, various structures, a white fence, and ships. The music of this course is a remixed version of the first part of "The New Origin" from Final Fantasy V. 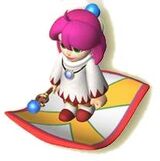 White Mage possesses below average speed, but above average controls. Her vehicle, the Cosmic Carpet, also allows her to float. The best way to defeat the White Mage is to use a character with good controls. White Mage's Barrier charges every 16 seconds like Chocobo's Dash does, but unlike Dash, the Barrier triggers automatically. Black Magician is a good character to use as he can easily overmatch White Mage's top speed and is a great cornerer on his own. White Mage uses every stone she gets unless she somehow slips to 5th or 6th and keeps one type of attack stone, which is not very likely when the other racers are even slower than she is.

Ability: Barrier - Protects White Mage from the effects of magic stones and some abilities. Triggers automatically.