An uncontrollable firecracker with a chip on her shoulder and a bomb in her bag, Mutsuki has convinced herself the entire world is out to pick on her. With her explosive personality and constant bomb threats, this petite paranoiac leaves a lasting impression on everyone she meets. However, although she doesn't realize it herself, Mutsuki is a brilliant inventor, and the Armory has even hired her to assist them on several projects.

Mutsuki Chiharano is a supporting character from Final Fantasy Type-0, who also appears in Final Fantasy Agito and Final Fantasy Awakening. She is a Class Twelfth Agito Cadet in Akademeia, the magic academy of the nation of Rubrum, and specializes in making explosives.

Mutsuki has green eyes and slate blue hair, tied in a ponytail with a yellow scrunchie with pink "clacker ball" ornaments. Mutsuki has a chocobo and a moogle keychain on her backpack. According to the Rubicus, Mutsuki is 15 years old and 4'9" tall. While she uses bombs as weapons and hoists a backpack full of them, her concept art shows that on the field she uses a summoning platform to portal through more powerful official military grade bombs.

Mutsuki is a genius inventor of Class Twelfth and keeps a supply of homemade bombs handy. She has a paranoid personality and is trigger-happy with her bombs, causing many to avoid her.

She can be found in the Sixth Arms Research institute during the afternoon and evening.

Mutsuki's parents were famous researchers at Akademeia prior to being killed by Militesi spies. The textbooks of Akademeia were written by Mutsuki's parents. Mutsuki is found in the research labs; when King and Seven meet her, she believes they are trying to bully her and threatens them with a bomb. When Mutsuki realizes the bomb is unfinished, she runs off, threatening to get back at them later.

When Seven and Cinque ponder how they can blow up a building without hurting those around it, Seven takes King to go see Mutsuki. Mutsuki asks to see the building's blue prints and adjusts the explosives accordingly. Seven and King thank her, and, seeing their sincerity, Mutsuki promises to help if Class Zero ever needs her.

When Tempus Finis begins, Queen and Trey find Mutsuki is still making bombs, convinced the Rursan Reavers have come to bully her, determined to destroy them with everything she has. Queen comments that a time like this Mutsuki's conviction is comforting.

In the alternate ending, Queen, Deuce, and Cinque gossip about the rumor that Mutsuki is in a relationship with Ace.

Like a number of students at Akademeia, Mutsuki can join Class Zero as one of their allies through various sidequests. When Class Zero is assigned a mission requiring expertise with precision bombing, they can ask Mutsuki to help them fulfill the request. When they praise her expert knowledge of bombs and explosions after completing the mission, she will join Class Zero.

Mutsuki is playable, but is one of the weakest along with Cater, Eight, Nine, and Trey. She throws homemade bombs as her special skills to damage enemies. Her strongest skill is to throw a poison bomb on her enemy to deal poison damage. She is not useful in later chapters as her throwing skills are succeeded by Kazusa Futahito who can throw chemical bottles on his enemies. 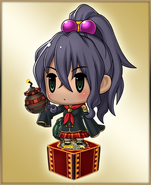 Mutsuki appears on a Triple Triad card in the version playable via Final Fantasy Portal App.

Mutsuki Chiharano was designed by Roberto Ferrari. The Final Fantasy Type-0 Kōshiki Settei Shiryōshū Aku no Hishi art book contains concept art for Mutsuki's weapon, implying there were once plans for her to appear in a battle. She would have wielded some kind of compass-type apparatus.

Mutsuki is voiced by Marika Matsumoto in Japanese. She shares this voice actor with Rikku from Final Fantasy X, Final Fantasy X-2, and the Kingdom Hearts series.

She is voiced by Cassandra Morris in the English version[1]. She shares this voice actor with Edea Lee from the Bravely series.

Mutsuki's bag features keychains of a chocobo and a moogle. 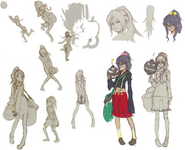 Mutsuki in the Type-0 manga.