The Mutantomato is a boss in Final Fantasy XIII-2. It is a weakened version of Royal Ripeness found in Sunleth Waterscape -300 AF- after the player solves the paradox in Archylte Steppe -??? AF- and acquires the White Hole Gem from the Coliseum. Due to the flan no longer being supplied to Royal Ripeness, it has drastically weakened, making it possible to defeat. Mutantomato's boss theme is "Limit Break!".

Keep(The higher the number, the more difficult it is to interrupt the enemy’s actions.)

The Mutantomato fights similarly to Royal Ripeness, with swifter attacks that wound the party immediately, but lacks its passive healing. It's Pouty Pudding ability will grant it several status enhancements.

Boasting just under half the HP of the Royal Ripeness, the Mutantomato is a major downgrade in difficulty. The player should start off with Evened Odds (SAB/SYN/MED). Once having buffed and debuffed the boss with Deprotect and Deshell, the party should switch to RAV/RAV/RAV building up the Stagger gauge steadily.

Snow will keep the chain gauge from draining too fast, so the player can focus on the Ravager role. Once at the stagger point, the party should either switch to Diversity (COM/RAV/MED) to heal up should the player feel as they may not finish off the boss in one stagger. The other paradigm to switch to during the stagger point is Cerberus (COM/COM/COM) which will allow heavy damage. 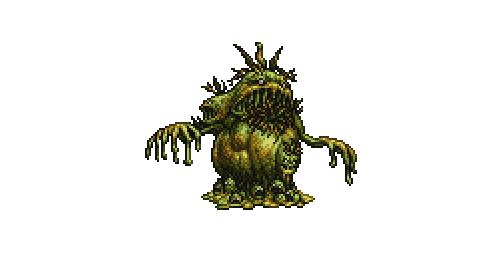 Concept artwork of the Mutantomato (right).