Final Fantasy Wiki
Register
Don't have an account?
Sign In
Advertisement
in: Races in the Legend series

Various
Mutant is one of the main character types or classes in Final Fantasy Legend series.

The mutant will improve at the end of nearly every battle. While the player can influence how the mutant improves, it is mostly random. And while the mutant nearly always gets more powerful, it is also possible to lose very powerful abilities. For this reason, if the player has any mutants in the party and intends to keep their good abilities, they must save the game after every fight, unless they lose a wanted ability, in which case they should reset the game and reload by using the soft reset to reset the game quickly.

This is a list of the skills that a Mutant can learn. See enemy abilities for more specific information about each individual abilities.

The basic system of growth for mutants is equivalent to that for humans, but the rate of growth is a little slower. However, they possess a higher level of MP and can acquire various special skills by fighting battles. Mutants can possess up to eight items, of which a maximum of four can be special skills that can be acquired.

Mutants can acquire these skills if there is room in their inventory. Mutants can learn up to a maximum of four abilities. After four abilities are learned, newly acquired abilities are exchanged with the last one on the list. It's best to let them become powerful by using a lot of abilities and upgrade their MP. It's also a good idea not to give them too many weapons since they acquire several different abilities as they become more powerful.

The Conjurer line of minor enemies may be Mutants: similar to Human and Robot enemies, they do not drop meat and are not available for Monster transformation, ergo they are not Monsters, while they favor spell books and staves like Mutants. These magical powers make them formidable foes if the player has not secured elemental resistances. There are no notable Mutant bosses.

This is a list of the skills that a Mutant can learn. See enemy abilities for more specific information about each individual abilities.

Mutants and Humans together represent the center of the transformation sequence: if they eat Meat, they will become a Beast. If they install parts, they will become a Cyborg. They can only revert to their default selves by using the Talon's Flushex Unit, once it's been found. All the guest characters are Humans and Mutants, but as guest characters cannot level or transform, the difference is largely moot, Faye has Magic rivaling the party's Mutants when she first joins the party.

Mutants are the magic specialists, and are as versatile as their magic inventory increases. Optimize spell damage by targeting the enemy's elemental weaknesses and avoiding their strengths. They can do decent weapon damage by using weapons with mutant bonuses.

The Male and Female Mutants make an appearance as a card. 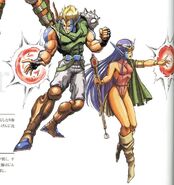 Mutants are called Espers in the Japanese version. [view · edit · purge]In fiction, an esper (stylized as ESPer) is an individual capable of telepathy and other similar paranormal abilities. The term was apparently coined in this sense by Alfred Bester in his 1950 short story "Oddy and Id" and is derived from the abbreviation ESP for extrasensory perception.