I am a machinist. Do you know the history of my trade?

Mustadio Bunansa, also known as Mustadio Bunanza, is a character from Final Fantasy Tactics whom Ramza Beoulve and Agrias Oaks rescue from Baert Trading Company. He wields a gun and can cripple enemies in various ways with special shots.

Mustadio is a young man with ponytailed blond hair and brown eyes. He wears a long-sleeved yellow shirt with brown gloves and blue pants with a brown bag. He also has an ankle pouch and brown shoes.

When the mercenaries corner Mustadio, Ramza Beoulve and Agrias Oaks come to his rescue while they are on their way to Lionel Castle. After fighting their way to Lionel, the three meet with Delacroix, unaware of what he is up to. Agrias stays behind to guard Princess Ovelia, while Ramza accompanies Mustadio back to his hometown of the Clockwork City of Goug to rescue his father. Mustadio separates from Ramza, and gets captured.

Baert accosts Ramza and has Mustadio and Besrudio brought before them. Baert threatens to kill Besrudio if Mustadio does not divulge the location of the Taurus Stone. Mustadio claims it is in the chimney near Ramza, and Baert has Ramza retrieve it for him. After revealing that the cardinal is complicit, Baert leaves with the Stone, and his minions attack Ramza. A disarmed Mustadio struggles to hold his own, but Ramza and his forces rescue him. Upon regrouping, Besrudio bemoans the loss of the Stone, but Mustadio reveals the one in Baert's hands is a fake, and that he has the real Taurus Stone.

As Ramza and Mustadio make their way back toward Lionel by an alternate route, Baert returns to Lionel with the fake stone, unaware that he goes to his own death at the hands of the cardinal. Agrias escapes from Lionel and rejoins Ramza and Mustadio, but the trio runs into trouble with mercenary Goffard Gaffgarion. Ramza defeats Gaffgarion in a one-on-one battle at the gate of Lionel, allowing the trio to confront the cardinal.

Cardinal Delacroix pulls out the Scorpio Stone and transforms into Cúchulainn, one of the Lucavi demons. Ramza and Mustadio prevail, defeating the monster and recovering the Scorpio Stone. From here on Mustadio remains with Ramza throughout his quest to defeat the Lucavi.

After Ramza's party defeats Belias, Ramza and Mustadio return to the Clockwork City of Goug and learn that Besrudio has discovered an unusual-looking device with a strange symbol. After helping a warrior named Beowulf Cadmus rescue Reis Duelar from the Mining Town of Gollund, they are rewarded with an auracite, which they use to power up the device, which is actually Construct 8.

Construct 8 tells Ramza to give it an order, and Ramza, wanting to test out his new ally, tells it to attack Mustadio. Construct 8 attacks Mustadio, and Ramza scrambles to resurrect him with a Phoenix Down.

After the fight with Zalmour Lucianada, they return to Goug where Besrudio has come up with another unusual device. Another auracite is required to activate it. At Nelveska Temple, Ramza and Mustadio defeat another bot, Construct-7-New and gain the Cancer Stone. Taking it to Besrudio, they activate the device, which summons Cloud Strife. He runs off, but Ramza and Mustadio later catch up with him after defeating Adrammelech. Cloud has ran trouble at the Trade City of Sal Ghidos, where Ramza had previously bought a flower from an unusual girl.

Mustadio's default and exclusive job is the Machinist, which specializes in guns to disable foes from afar and can easily defeat undead enemies.

Mustadio first appears as a guest in Chapter 2, starting at level 10 with 60 Bravery, 62 Faith, and equipped with the Romandan Pistol, Headgear, Mythril Vest, and Battle Boots. He starts with the Aimed Shot ability, while his other abilities are randomized.

When fought in the eleventh Rendezvous battle: All-Star Melee, Mustadio is two levels higher than the highest level deployed unit. He starts with 60 Bravery and 62 Faith and has the Machinist job, equipped with the Blaster, Thief's Cap, Black Garb, and Japa Mala. He has access to the commands Aimed Shot and Arts of War, as well as the abilities Soulbind, Defense Boost, and Move +3.

When fought in in the fourteenth Rendezvous battle: Brave Story, Mustadio is level 99 and starts with 68 Bravery and 65 Faith. He uses his default job and comes equipped with the Blaze Gun, Thief's Cap, Luminous Robe, and a random accessory. He has access to Aimed Shot, Arts of War, Soulbind, Defense Boost, and a random movement ability.

If Ramza keeps Agrias Oaks, Alicia, Lavian and Mustadio in the party, and the party reaches a city or a town (but not a castle town) on the 1st of Cancer in the final chapter, Mustadio buys Agrias the Tynar Rouge lip rouge for her birthday, and hints at a hidden affection for her. It costs 50,000 gil, but the party must have at least 500,000 gil to activate this quest. The event is found exclusively in the Final Fantasy Tactics: The War of the Lions.

Mustadio also appears outside the series:

With the release of Final Fantasy Tactics: War of the Lions, Mustadio and his father share the last name of "Bunansa" with the Final Fantasy XII character Cidolfus Demen Bunansa and his son Balthier. 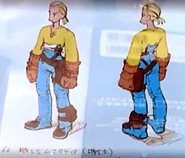