There are three known types: avian (Borra, Bayra), frog (Daraya, Donga), and mouse (Pukara, Pukutak). The musicians' existence coincides with that of the woods. They may have an affinity for music as the spirits met belong to Borra's band. They have an ear for prophecy as witnessed on their talks to Yuna about the fading woods and mention of the state of the Farplane.

The musicians make an appearance at the port of Luca when Grand Maester Mika and Maester Seymour arrive in the city.

They can be seen in Sphere Theater later in the game.

If the player does the "Track down the Troupe!" mission, they can head to the northern lake to find Bayra and they request him to help Tobli. Bayra contacts his friends because it is not his right to decide for them. However, he receives no response since they have taken in the form of circles of butterflies. He tasks the Gullwings to search for them. The Gullwings can also find three miniature versions of the musicians, two of which are in the same area as the mission start with the first right next to Yuna on the left and the second miniature musician near the entrance to the same area. The third mini musician is in the first area along the forest path from the lake heading through the woods, though Yuna will have to jump off the branch when near the butterfly ring in the air in order to go through it and meet the mini musician below on the lower path. Once the Gullwings finish finding them, they agree to help Tobli.

In Japanese, the three musicians share their voices with Leblanc, Logos, and Ormi. Pukutak is voiced by Satomi Yasuhara, Donga is voiced by Nobuo Tobita, and Bayra is voiced by Kiyotaka Furushima.[1] 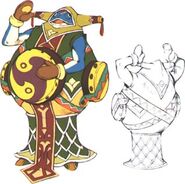 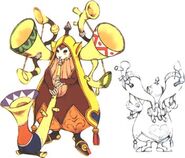 Musicians aboard the Celsius.

Musicians performing in the Moonflow.

Musicians and YRP during Tobli's show.