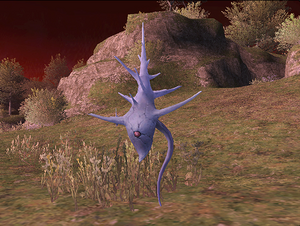 An overgrown conch of prickly demeanor, from whose weatherworn shell multitudinous spines extend. Predatory by nature, the murex quickly spread to prevalence following the cataclysm, displacing the less assertive of the traditional Abyssean fauna. While ordinarily given to vertical suspension, a provoked creature will often shift to a horizontal posture: a warning in no uncertain gesticulations that the object of its ire will soon meet with the discomfort of impalement.

Murex are odd creatures found only within the dimension of Abyssea. The origin of these creatures is uncertain; however, shortly after the events that caused the crimson sky, these creatures appeared in several areas, quickly replacing local fauna. They hunt at night, but can only detect other beings when they use job abilities or weapon skills. Murex can drop either a special variety of tissue called a sanguinet, or a piece of its spiny body, called a spicule.