Soft rains fell when this sword was forged, and the dew still rises on it each evening to wash off the day's blood.

The Murasame (村雨 or ムラサメ, Murasame?, lit. Village Rain), also known as MonsterKillr, is a katana appearing in some Final Fantasy titles. The blade is commonly confused with the Muramasa and the Masamune.

A sword also known as the Demonblade.

The Murasame is the second most powerful katana that can only be equipped by the Ninja class. It provides 50 Attack Power, 10 Accuracy, and 50 Critical, as well as +40 Evasion and +5 Strength, Stamina, and Intelligence, but reduces Agility by 5. It can be dropped from Omega in the Lifespring Grotto, and when used as an item, will cast Protect.

Known as the best katana.

The Murasame (Demon Blade Murasame in Easy Type) is one of the ultimate katanas equippable by Edge, obtained in the Lunar Subterrane after beating its guardian, a White Dragon. It is a sister sword to the Masamune. In non-3D versions, it provides 40 Accuracy and +5 Strength, Stamina, and Intelligence while lowering Agility and Spirit by 5, while in the 3D versions, it provides 100 Accuracy, +1 Speed, and +3 Strength. In all versions, it provides 55 Attack. When used as an item, it casts the Protect spell. This weapon is metallic.

The Murasame is a high-ranked katana that provides 55 Attack, 40% Accuracy, +5 Strength, Stamina, and Intelligence, lowers Speed and Spirit by 5, and casts Protect when used as an item, and can be found in the Subterrane. It can be used by all ninjas.

Katana with a high critical hit ratio. Can be used two-handed.

The Murasame (MonsterKillr in Anthology) can be stolen from Rukh. It has a 25% critical rate, and provides 94 Attack.

The Murasame is a katana equippable by Cyan and some other party members. Betting this in the Coliseum will allow the player to win a Masamune. It has an attack power of 110, +10% Evasion, and enables the Bushido and Runic commands. It can be found on the Floating Continent, stolen from Kamui, Samurai Soul, or Behemoth King (Undead), or betting the Sasuke in the Dragon's Neck Coliseum.

Murasame is also one of the weapons thrown by the Outsider, which deals heavy non-elemental damage to one target.

The Murasame is one of Cloud's swords. It can be purchased in Wutai from disc 1 onwards for 6,500 gil. It has two sets of linked Materia slots, and one single slot, and provides 51 Attack, 100 Accuracy, and 12 Magic.

The Murasame is the default weapon of the Katana (Male) Turk character.

The Murasame is a katana for Auron, and has One MP Cost as one of its abilities. It can be customized from any katana using Three Stars x20, or by entering the password "MURASAME" on the Fahrenheit.

Murasame is a treasure dropped by the Ash Dragon deep within Ifrit's Cauldron. It should be noted that it is a great katana by the classification system as opposed to a katana, which is a single-handed Ninja weapon.

Additionally, another great katana called Murasamemaru makes an appearance as one of the Pulse Panoplia, exuding a visible pulsing aura of water. Obtainable either as an extremely rare drop from Uptala (one of the Voidwatch series of monsters,) or by redeeming five Pulse Cell: Mu (obtainable by defeating the same monster), the great katana also has the hidden property of making all its weapon skills deal non-elemental damage.

In the original PlayStation 2 version, Murasame is sold on the Phon Coast for 8,500 gil, and is also available through the Hunt Club. It can be equipped after acquiring the "Katana 2" license. It is Water-elemental and has an Attack power of 66. Katana have average attacking speed.

In the Zodiac versions, Murasame provides 62 Attack, 23 Evade, 31 CT, 20% combo rate, is Water-elemental, and requires the Katana 3 license for 70 LP, it can be bought in Mt Bur-Omisace for, 5,800 gil, found as a treasure in Barheim Passage (West Annex), Paramina Rift (Karydine Glacier), and poached from Pyrolisk (5%). It can be equipped by the Bushi class.

A peculiar sword. Causes much blood shed in battle with its sharp edge.

The Murasame is used by Samurai, and can be purchased at most outfitters for 70,000 gil. It has an attack power of 10, a weapon defense of 15%. It is also found with the Treasure Hunter ability in Monastery Vaults second level. The katana's Iaido ability is called Rain of Wisdom, which restores the HP of allies.

Dew rises on this sword's blade to wash it of blood.

The Murasame is a katana for Ninjas and Assassins. It is of the Water element and can be bought in all shops for 5,000 gil after the first shop upgrade and provides +31 Attack. It teaches Water Veil to Ninjas and Aphonia to Assassins.

The Murasame provides +31 Attack. It is Water-elemental and teaches Wind Slash to Parivirs, Water Veil to Ninjas, and Aphonia to Assassins. It can be bought for 500 gil in the shop after creating it in the Bazaar after using a Water Stone, Xergis Tin, and Healing Water.

Murasame is a weapon for Jack. It provides 10 Attack Power and is bought from Rokol for 1600 gil.

The Murasame is an artifact that increases Strength by 4. It can be obtained by defeating the Orc King in the third cycle at the Mine of Cathuriges.

The Murasame is a level 60 katana with +41 Attack that increases EX Intake Rate by +3m. It can be obtained by trading Kiku-Ichimonji, a Lizard Horn, Taurus Horn x2, and 18,360 gil.

It is only natural that a sword found beneath the surface of the moon be special.

Murasame grants +8 to Attack. It can be equipped by Samurai, Ninja, and Auron.

A katana made of water itself. Cleanses foes of ill intent, making them less likely to target you.

An infamous katana. Legend has it that it converts its owners desires into power, and that the beauty of its blade draws others towards it. The murasame shines most after it has drained the blood of a living creature, and though powerful, it eventually leads whomever wields it to kill meaninglessly. Thus, rumors say that no one has been in possession of it for very long.

A katana from a faraway world. The royal family of Eblan is said to have passed the secret arts of ninjutsu down through the generations, with this blade ultimately falling into the hands of a young prince. In its world of origin, it was known that this weapon could not be obtained without first defeating a powerful white dragon.

Murasame is a katana that provides 61 ATK. It is obtained by defeating the White Dragon in the Farplane.

Murasame (FFIV) is a katana obtained as the Super Trust Master reward from Ninja Edge. It provides 198 ATK, 198 DEF, 150 MAG, +20% Accuracy, enables usage of Protect, increases physical evasion by 20%, and increases chance of being targeted by 20%.

The Murasame appears as a 2-handed sword within the Forsaken Dungeon. It provides 26 Weapon Atk, 8 Durability, +3 Speed, and -1 Consumption Rate. Only Masuda Koji can equip this weapon. 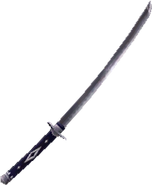 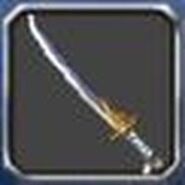 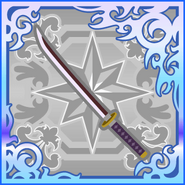 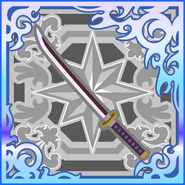 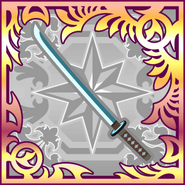 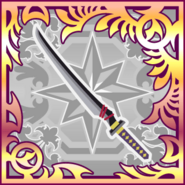 [view · edit · purge]Murasame, also known as Murasame-maru (村雨丸), is a fictional katana from the epic novel Nansō Satomi Hakkenden, published during 1800s. It is a magical blade of ice and belongs to one of the dog-reincarnated protagonists, Shino Inuduka. In one episode, the blade is used to extinguish the wildfire set by the enemy.