Cid Pollendina: Oh, shut up and help me remodel the Multiplayer page!
Please expand this article into a full one. The following tasks need to be completed:This request can be discussed on the associated discussion page. Remove this notice upon completion.

Do you want to play multiplayer game?

Multiplayer (マルチプレイ, Maruchipurei?), also called Multiplay Mode, allows more than one player to play a Final Fantasy game at a time. Some games allow two players to control the main party in a game, others allow the players to face off, while still others are MMORPGs and allow many players to coexist in the game simultaneously.

A messaging mode called Mognet appears in the Nintendo DS version, available over local Wi-Fi network. Before the shutdown of the Nintendo Wi-Fi Connection service for Nintendo DS on May 20 2014,[1] people had the possibility to trade friend codes and send letters via the Wi-Fi network. Unfortunately, this means that current DS players can no longer utilize the Mognet service to its fullest, and new players will only be able to use local DS-to-DS wireless communication to access the extra features it unlocks.

Two players can play the SNES version. There is no visible option in the North American "Final Fantasy II" version to allocate the characters, but as long as a second controller is plugged in, a second player can give commands to any characters during battle. However, in the original Japanese version, there is a menu option in config that allows each character can be assigned per controller, as is the case in Final Fantasy V and Final Fantasy VI.

A two-player Whyt battle mode appears in the DS remake.

In the WiiWare version, players can assign party slots between four different controllers.

In the SNES and PS versions, players can allocate different party slots to the two different players, though player one still controls the party on the map.

Similarly to Final Fantasy V, players can assign battle party members to player one or player two in the SNES and PS versions. There's one thing to know when playing with two players that involves the Blitz command, if one player presses any buttons while the other is attempting to input a Blitz command, the Blitz will fail.

The Japanese version featured a multiplayer mode which serves as a prequel to the main game. It was not made available to overseas versions.

Final Fantasy X was originally going to include online elements, but the idea was scrapped.[citation needed]

The "Comrades" expansion adds cooperative multiplayer to the game, allowing players to create their own avatar and take on quests with up to three other players online.

Co-op multiplayer was always available, but the comparatively small player base made its quests difficult to start, needing two or more players and the leader (host) could not start until all other players reported ready. The Final Fantasy XV collab partially resolved this by adding the four main cast members as AI players during designated timeframes. These quests would be best experienced with all four players active, as they could unleash a United Might attack against the boss of the quest.

There were four regular quests that cycled every 2–3 days until the start of the sunset period in late March 2018, each offering different upgrade materials per quest. Beyond this, event co-op quests would offer special exchange currency, which would be doubled in primetime hours.

Final Fantasy Type-0 includes multiplayer elements and has ad-hoc and online infrastructure features. The multiplayer allows players to call friends and people from other parts of the world to help them in battle and will run on a time limit. Multiplayer is the only method of getting SPP in those versions.

Multiplayer is only available in the original PSP version and has been cut for the HD version, being replaced by the Support Personnel system as a way of getting SPP.

This section in Final Fantasy Tactics A2: Grimoire of the Rift is empty or needs to be expanded. You can help the Final Fantasy Wiki by expanding it.

To play in multiplayer mode, each player must use a Game Boy Advance as a controller and connected to the GameCube. Then, each Game Boy Advance will act as the player's personal screen where they can control their character and access an individual menu without disrupting the game's flow.

Multiplay Mode can be chosen at the title screen, and allows the player to either create a party, join a party, or play solo. Players can play Story Mode in almost its entirety without the story bits (excluding some parts such as replaying battles with early bosses at the Crystal Temple) or play various Missions, accepted at the castle in Rebena Te Ra.

This section in Final Fantasy Crystal Chronicles: The Crystal Bearers is empty or needs to be expanded. You can help the Final Fantasy Wiki by expanding it.

Multiplayer is ad-hoc and can only be played between two people who are next to each other.

Multiplayer is the same as its predecessor, but includes the new gameplay features introduced.

Co-op multiplayer is always available, albeit restricted to certain events and scenarios.

Where co-op is available, it is marked with a badge indicating that the area is optimized for co-op play. Entering a co-op area offers the player a choice to organize a group or go solo with the currently-active party. If the player goes solo, they can pick a support unit to call for the battle. If the player enters group play, they must select whether to become a host (party leader) or guest (party member).

As a host, the player can collect any target items offered in the battle, as well as having the ability to save high scores and collect points to pick up event items. Hosts can also call upon previous friends to form a party; or, they can use the Free Recruit mode to draw random players into a party. Each player has approximately five minutes to lock in; but with each player that joins, the timer resets. Once all players lock in, the host spends one of their five Link Bells to start the battle. Link Bells refill at a rate of one per two real-time hours .

As a guest, no scoring or target items can be obtained, but the player can be picked up by a free-recruiting player and has the option of spending a Link Bell in order to collect extra spoils after battle.

Once battle has begun, each player controls their unit in real-time. Each player may also call the active summon in their active party once during the battle.

The game features a multiplayer mode with four players called Chaos Shrine Mode. During multiplayer all players receive the record of the group's best player, meaning a player can get good items by playing with good players.

Versus Battle Mode is a new multiplayer mode, it can be selected from the main menu and played locally or online.

The aim is to get the highest score against the opponent in a Battle Music Sequence. The twist is that the players have an EX Gauge, which gradually fills during the song. When the gauge is filled the EX Burst activates and will cause negative effects to whoever is inflicted, thus changing strategies during battle.

The game features a multiplayer mode in which up to four players can connect together via local wireless connection, and fight monsters together. Playing in multiplayer mode gets significantly more wireless points which can be spent in the wireless shop for weapons, armor, and accessories.

This section in Final Fantasy Fables: Chocobo Tales is empty or needs to be expanded. You can help the Final Fantasy Wiki by expanding it. 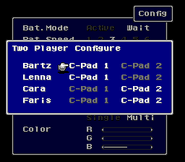 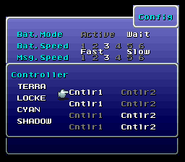