Many years ago, Mt. Nibel was one of the many earliest locations where Shinra Electric Power Company erected a mako reactor. While the nearby town of Nibelheim prospered due to the power it supplied, its forests and wildlife withered away and the mountain became a barren coarse wasteland notorious for its dangerous monsters, from which many of the locals speak tales of people who ventured into its heights only to never return.

In 1995, Tifa Lockhart tried to climb Mt. Nibel to be reunited with her recently deceased mother, whom she believed she could meet if she crossed the mountain. A young Cloud Strife followed, but when Tifa was injured and fell into a coma, the local townsfolk blamed him and Brian Lockhart forbade Cloud from approaching Tifa.[1] Sometime after, Tifa became a tour guide at the same mountain.

Years later, 0002, just prior to the Nibelheim Incident, Sephiroth, Zack Fair, and several Shinra troops—including Cloud Strife—were sent to Nibelheim to investigate the malfunctioning reactor. With Tifa as their guide, the party advanced through the caverns after a rope bridge snapped. They came across a mako fountain, and while Tifa marveled at it Sephiroth explained the nature of magic and Materia.[1][2]

During "Unnatural Hometown" in Final Fantasy VII, in December of 0007, Cloud's party crossed the mountain to reach Rocket Town.

Mt. Nibel is located on the western continent, and separates two segments of the northwest of the content. The west exit of the mountain leads to a patch of land where Rocket Town is located, while the east exit is behind the village of Nibelheim. The mountain dominates much of the landscape of the north of the continent.

The mountain is mostly barren rock, with air described as cold.[3] A narrow, winding traversable path runs through it, and a long, wooden bridge prone to collapsing connects one of the plateaus to a cave. Several caves lit green by mako are dotted around the mountain, and a mako spring is located within a cave containing several dead trees. At the base of the mountain's west exit (close to Rocket Town) is a large infrastructure of winding pipes, ladders, and metal plates above a pool of mako, likely connected to the Nibel Reactor. 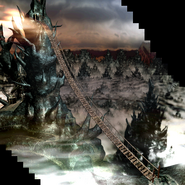 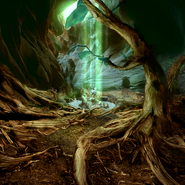 Mt. Nibel is first visited during "The Tragedy of Five Years Ago" by a party of young Cloud and Sephiroth. This is a brief visit in which they must follow Tifa as she gives them a tour towards the Nibel Reactor. During the flashback, it is possible to roam around and fight monsters, though there is no gain in doing so; Cloud will be defeated quickly, though Sephiroth will dispatch all enemies with ease.

In "Unnatural Hometown", the entire party returns to Mt. Nibel with the objective of passing through to reach Rocket Town. Along the way, several powerful items can be obtained, and the journey culminates in a battle against the Materia Keeper boss to leave the mountains.

The following items can be obtained:

Like in Nibelheim, the track "On That Day, 5 Years Ago" (5年前のあの日, Gonen Mae no ano Hi?) continues to play in Mt. Nibel. When the party returns to Mt. Nibel, "Under the Rotting Pizza" (腐ったピザの下で, Kusatta Piza no Shita De?) plays as the background music. 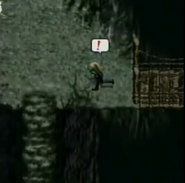 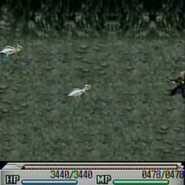