Cid Pollendina: Oh, shut up and help me remodel the Mt. Gagazet page!
Please expand this article into a full one. The following tasks need to be completed:

Relm: I couldn't miss the chance to practice my drawing!
This article is in need of a few pictures. Perhaps you can help by uploading a picture of Mt. Gagazet in Theatrhythm: Curtain Call.

Gagazet is Ronso land, sacred mountain of Yevon. The mountain will not bear the footsteps of infidels!

Mt. Gagazet is a location in Final Fantasy X and Final Fantasy X-2. It is the home of the Ronso and gateway to the Holy City of Zanarkand in the world of Spira.

The snow-covered, towering Mt. Gagazet is considered sacred land. Before the Eternal Calm only summoners and their guardians were permitted to pass beyond the mountain gate as the final test of the summoner's resolve before entering the Zanarkand Ruins.

Once Yuna and her guardians arrive at the sacred mountain, their way is blocked by Maester Kelk Ronso. After speaking to the group, he is impressed by Yuna's conviction and her determination to finish her pilgrimage despite being disgraced by followers of Yevon convinces him to let her pass. Kimahri is challenged to a battle by Yenke and Biran to settle an old rivalry and once Kimahri overcomes the duo the Ronso swear to guard the gate stopping anyone who might wish to detain the group.

While climbing the mountain, the party spots several monuments left from previous summoners marking those who fell, having been bested by the mountain. It is said that these summoners often become fiends, as they die alone and there is nobody to send them. As the party reaches the part of the mountain known as the Prominence, they are accosted by Seymour Guado who has murdered dozens of Ronso who died trying to protect Yuna and her friends, Kelk, Biran, and Yenke among them. The party defeats the third incarnation of his unsent form, Seymour Flux.

The party discovers a wall of thousands of fayth used for a group summoning; the original residents of Zanarkand who gave their lives. Collectively, these fayth are used by Yu Yevon to summon Dream Zanarkand, and Sin protects Yu Yevon, allowing this illusion to have continued for a millennium.

After climbing the mountain path travelers must complete the Trials, which allow passage to the summit and the road to Zanarkand, and Tidus, Wakka, and Rikku complete many trials alone as underwater travel is required. Before the end of the mountain path Braska's Sphere, containing a final message from Braska to his daughter, is found down a short trail off to the side.

At the summit the party battles Sanctuary Keeper and views the ruins of Zanarkand against the setting sun.

After the Eternal Calm begins, Kimahri becomes the Ronso elder and the Ronso continue to live at Gagazet's mountain gate. Kimahri found a sphere with a man who looks like Tidus and had Rikku deliver it to Yuna, who starts her quest as a sphere hunter.

The mountain peak used to be surrounded by a dense mist, but it lifted following Sin's defeat and the fayth departing to the Farplane. What was uncovered was a floating ruin, remnants of an ancient temple, which sphere hunters explore hoping to find treasure. The Ronso are offended by the trespass of their land and Kimahri asks Yuna to get rid of them.

The Gullwings pick up treasure sphere waves emanating from the newly discovered Floating Ruins and decide to look for the sphere. The Leblanc Syndicate follows them to the ruins and after a short battle race YRP to it. The syndicate ends up hanging precariously from the edge of the ruins, and the Gullwings swipe the sphere although it is said to be a "dud". It can be is equipped as the Black Mage dressphere.

Later, the Gullwings search for syndicate members to steal their uniforms so they can infiltrate Chateau Leblanc. Finding Ormi and Fem-Goons, they engage in a short skirmish and claim a uniform. Afterward, the YRP have a chance at relaxing in the mountain's hot springs.

Kimahri has many problems as the elder of the Ronso. Garik Ronso, among several other Ronso Youths, have come to hate the Guado and are ready to extinguish their race, wanting retribution for Seymour's actions. Though Kimahri tries to stop the group, YRP puts down the uprising by fighting Garik and stopping him from leading both races to war. Most of the Ronso will forgive the Guado but Kimahri highlights the example Lian and Ayde have set for the Ronso, and suggests they travel Spira and learn from their journey to move forward with the rapidly changing world.

The Ronso builds a statue of Yuna complete with a horn, as they deem the high summoner worthy of being a Ronso. Yuna was promised this by Biran during her pilgrimage, who had said he would make a grand horn for her statue as penance for breaking Kimahri's horn long ago. Although Biran did not live to see it, one of the Ronso fulfilled his promise, possibly in remembrance of Biran.

The hot springs the Gullwings stumble across at Gagazet seem to be frequented by many Spirans, including Clasko, Rin, and Isaaru. Their interactions can be viewed through the CommSphere.

The Floating Ruins are situated at the peak of Mt. Gagazet. The peak used to be perpetually shrouded in fog, but after the Fayth Scar became dormant the fog lifted revealing the ruins at the top.

The appearance of Wantz on Mt. Gagazet is missable, and if the player does not speak to him on their first visit he will not appear in Macalania to sell the four-slotted equipment. After talking to Wantz on Mt. Gagazet, he will be found at the entrance to Macalania Woods from the Thunder Plains (Macalania Woods - South), after obtaining the Fahrenheit and completing the mandatory visit to Bevelle's Highbridge.

Wakka must hit a target with his blitzball to open a new path within the caves.

Tidus, Rikku and Wakka must swim into three buttons corresponding to their Sphere Grid color scheme—blue for Tidus, green for Rikku and orange for Wakka—to open the path to the Zanarkand Ruins.

In the International, PAL and HD Remaster versions, Dark Anima can be fought at the entrance after the player has control of the airship. Dark Anima will appear after completing the Target minigame again. This is available after viewing the campfire scene at start of Zanarkand Ruins.

Each failed attempt triggers a battle composed of all fiends found in the Mountain Cave in a strict order, starting with Bandersnatch's group, finishing with Behemoth, and then back to Bandersnatch. The player can exploit this by failing repeatedly to capture the enemies or to receive gil, items, and experience.

In Chapters 1 and 2, when the player talks to certain Ronso and a choice window pops up, choosing 'correct' answers will affect the optional boss battle with Garik and his Ronso Youths in Chapter 3. Choosing the correct answer when talking to Kimahri in Chapter 2 will also grant a scene in which he gives the Gullwings the Trainer dressphere in Chapter 3.

Sending a chocobo to Mt. Gagazet to look for treasures finds the following items (depending on the chocobo's level):

We'll need uniforms to sneak into Chateau Leblanc, so what are you waiting for? Get to it!

Garik, in his hatred of the Guado, has decided to launch an attack! Meet him on the summit of Mt. Gagazet and stop him - by force, if that's what it takes.

Well, Kimahri and Garik have made peace, and Lian and Ayde are back on the mountain! Things are looking pretty good!

Lian and Ayde have returned to Mt. Gagazet, but Garik Ronso is still feeling resentment about the Guado. It takes a lecture from Elder Kimahri Ronso to teach him and the rest of the Ronso to grow by working together peacefully.

To get Episode Complete in Mt. Gagazet the player complete the following:

I guess the Ronso really do have to deal with Ronso problems.

Yuna fails to stop Garik from slaughtering all the Guado. Though Garik killed the remaining Guado, he is still not satisfied despite Kimahri telling him that his wishes came true and calls Garik a murderer.

"Servants of the Mountain"

"Hymn of the Fayth - The Ronso" plays after Kimahri defeats Biran and Yenke. "Calm Before the Storm" plays in the Mountain Cave. "Wandering" plays after the Sanctuary Keeper is defeated.

"Calm Before the Storm"

In Final Fantasy X-2 the theme of the mountain is called "Mt. Gagazet".

Mt. Gagazet acts as the background for the Field Music Sequence of "Servants of the Mountain". 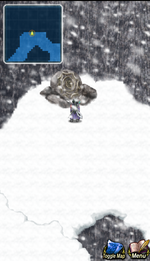 The Ronso treating Mt. Gagazet as a sacred place may allude to the Japanese culture where many mountains are considered holy with a Buddhist temple/shrine located on them. Thus they're sites of pilgrimages where people will climb up and pray.

There is a trade material called "Gagazet Steel", possibly a reference to what the Ronso had said about how Yuna's will is stronger than tempered steel.

Ronso settlement on the mountain base.

The trial of Mt. Gagazet.

The party on the summit of Mt. Gagazet.

Fayth Scar loses its power of summoning and turns into stone.

View of the Zanarkand Ruins from Mt. Gagazet.

The entrance to Mt. Gagazet. 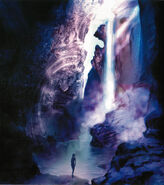 Artwork of the hot springs.