Mt. Corel is a location in Final Fantasy VII. It is a mountain that divides the area around Costa del Sol from the rest of the western continent of the planet. The town of North Corel is located just at the foot of the mountain, and the mountain is also home to a mako reactor. The mountain can be traveled via long stretches of an abandoned railroad system.

Barret Wallace and Dyne traveled through Mt. Corel while fleeing the Shinra Electric Power Company. Both of them were shot by Scarlet's troops, leading them to replace their hands with cybernetic arms.[1]

During "Barret's Past", Cloud and his party crossed the mountain during their search for Sephiroth. Later, in "Struggle for the Huge Materia", Shinra tried to transport a Huge Materia out of the Corel Reactor, only to have their coal train captured by the party, temporarily led by Cid Highwind. Cid Highwind managed to stop the train and save the town of North Corel.[note 1]

Mt. Corel is also seen in a flashback sequence when Barret tells the story how he lost his friend Dyne and what happened to his hometown.

Mt. Corel is located on the western continent to the northeast. The mountain cuts off the area around Costa del Sol from the rest of the continent, meaning one must travel along the mountain's path to pass between Costa del Sol and the Gold Saucer, a popular destination for tourists landing at the former.[2]

Mt. Corel is visited first during "Barret's Past" as a dungeon, by a party led by Cloud. As well as fighting monsters, the party must traverse several holes in the structure of the rail bridges, with a chance to fall through them if not careful. There are also some unique items found in a bird's nest by climbing the side of a railway track.

Later, the dungeon is revisited briefly in "Struggle for the Huge Materia" by a party led by Cid. The time in the mountain, as Cid's party simply fight a pair of Attack Squad enemies before boarding the train.

Mt. Corel has enemy formations with as much as five enemies (the maximum in one encounter), making it a desirable place to unlock a new level in Limit Breaks.

"Dear to the Heart" from Final Fantasy VII

Unlike most areas that enemies frequent, the background music of Mt. Corel is "Dear to the Heart" (想いを胸に, Omoi o Mune Ni?), except at the Corel Reactor, where "Mako Reactor" (魔晄炉, Makō Ro?) plays.

Mt. Corel was featured as a location in the demo for the PC version of Final Fantasy VII.

At the bridge of Mt. Corel in Final Fantasy VII is an unused scene of the party members admiring the view.

Frame from the tracks falling sequence. 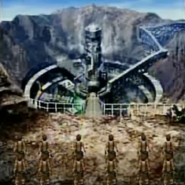 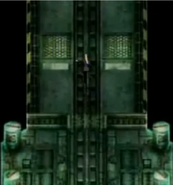 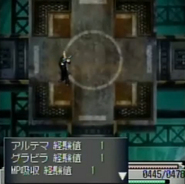 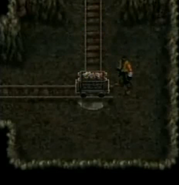 Mt. Corel Coal Mine in Before Crisis -Final Fantasy VII-.