In the world of Spira in Final Fantasy X and Final Fantasy X-2, movie spheres are collections of images, sounds and thoughts of people recorded for later viewing. During their pilgrimage, Braska, Jecht and Auron left several spheres scattered across Spira for their loved ones to eventually find.

In the Luca Sphere Theater, movie and music spheres can be purchased and then viewed or listened to.

Finding all Jecht's Spheres in Final Fantasy X HD Remaster earns the trophy/achievement Messenger from the Past.

Pyreflies can crystallize into spheres by reacting to people's feelings and memories and binding them with images and audio. Spheres make use of these properties of pyreflies to make recordings. The raw material for spheres is water that contains a high concentration of pyreflies, gathered from specific locations, such as the Macalania springs.

In modern Spira, a sphere camera is a common item to use when recording a sphere, however some spheres have a built-in mechanism for filming, notably when Yuna records her final message to her friends at the Mi'ihen Highroad.

During the Eternal Calm, movie spheres became an important part of the lives of many Spirans. Sphere hunting becomes a popular pastime and groups like the Youth League and New Yevon seek spheres documenting Spira's history. Freelance groups, such as the Gullwings and the Leblanc Syndicate, locate spheres for pleasure or profit. 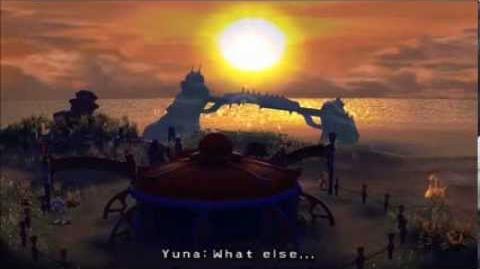 During the party's journey, the player will be able to find several movie spheres scattered across Spira. Ten of these spheres (the eight Jecht's Spheres, Auron's Sphere, and Braska's Sphere) will unlock new Overdrives for Auron upon being collected. Obtaining the first Jecht's Sphere after the fight against Spherimorph unlocks all the others, including in places that the player has already visited. The remaining two spheres (Jyscal's Sphere and Yuna's Sphere) are automatically collected at specific points in the game and only serve to advance the plot.

Concept design of a lit and unlit movie sphere.