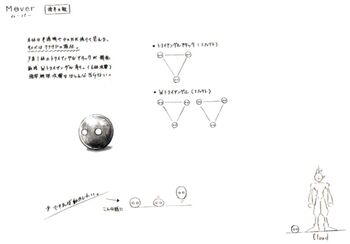 Mover (ムーバー, Mūbā?) is a recurring enemy in the Final Fantasy series. They appear to be red balls, with no physical features outside of two eyes. Movers usually appear in threes, and have low HP. However, to compensate, they often have very high Evasion, Speed, and are protected from most normal means of attack, making them dangerous foes.

Being some of the most difficult random enemies in the games in which they appear, they are usually encountered in the latter portions of the game, often in the final dungeon. Their main method of attack is the lethal Delta Attack. Despite their difficulty, they are very desirable enemies to fight, since they give large rewards in AP and gil.

Movers appear in groups of three in the final area of the Interdimensional Rift. If defeated before the encounter automatically ends, they give between 150,000 - 200,000 gil each and 199 ABP after being defeated.

Movers appear in the "factory" portion of Kefka's Tower. The reward for their defeat is rather mediocre.

Movers appear in the "swamp" room in the Northern Cave. They always appear in a group of three, giving the party 2,400 AP and 90,000 gil (although 0 EXP) after the battle.

Movers appear in the Cage of Binding within the Banora Underground. More powerful versions of the enemy called Mover RE, Mover EX, and Three Stars appear in the Missions.

Movers appear in the wilds of Terra and in Pandemonium.

Movers appear in the Castle of Nil. They use Delta Attack and are able to Flee at any point in the fight, even as their first action. If one Flees, the other two will Flee immediately after. Each rewards 100 JP, 300 total if all are destroyed.

Movers appear as a race of monsters. They are generally weak, but make up for their lack of strength by attacking in large numbers.

Mover appears as an enemy. As a nod to the large reward of defeating them, they appear within Cycle Quests, which are dedicated events for farming materials, gil, and experience.

Though these three are and always have been together, they bear no relation.

Movers appear as enemies encountered on the South Figaro Sea. They use Brutal Bound and drop the Stardust Rod.

This trio of small spherical bodies constantly bounces about. If you are distracted for even a moment by their rather cute appearance, you may find your magic sealed, your body paralyzed, and your very existence wiped from the world.

Movers appear as an enemy during Battle Music Sequences.

Sometimes a Mover will be resting on Serafie's head and it will grant 1 SP to every Mirage with Lann and Reynn.