Can this mountain truly wash away my bloodstained past?

Mount Ordeals is a location in Final Fantasy IV and Final Fantasy IV: The After Years. It is where people must undergo an "ordeal", or trial, to become a Paladin. It is located east of Mysidia, and divided into four sections: the foot of the mountain, the 3rd and 7th Stations (a reference to the set of Catholic prayers known as the Stations of the Cross; the third being "Jesus Falls the First Time" and the seventh being "Jesus Falls the Second Time"), and the Summit where the Fiend of Earth Scarmiglione guards the way to the Paladin's trial. It is full of undead monsters, possibly because of Scarmiglione.

Cecil Harvey, a Dark Knight, has learned from the Elder of Mysidia that he cannot face Golbez with his Dark Sword, as it does not work against true evil. As such, Cecil is forced to climb Mt. Ordeals and become a Paladin. He is accompanied by young mage twins: Palom, the Black Mage, and Porom, the White Mage, actually sent to spy on him. Palom extinguishes a fire blocking the entrance using his magic. Afterward, they climb the mountain to the 3rd Station and meet Tellah looking for the legendary spell Meteor to avenge his daughter Anna, and he joins the group.

Golbez knows Cecil attempts the climb, and has sent Scarmiglione, the Archfiend of Earth, after Cecil. Once Cecil has passed the 7th Station, Scarmiglione lets out hissing noises as the party approaches the summit (which Porom initially blames on Palom), and eventually reveals himself and attacks. After he is defeated, Scarmiglione is resurrected and has to be defeated again.

After Scarmiglione is defeated the second time, Cecil begins his trial. He is beckoned by a strange light, which calls him "my son". Cecil takes a sword, and is transformed into a Paladin. He must overcome his dark past using nonviolence to truly pass the test, and after parrying the attacks of his former self, he completes the trial. Tellah learns Meteor and remembers all his spells.

In flashbacks seen in Kain's Tale, Kain has isolated himself on Mount Ordeals for training when he hears a voice call to him. He approaches the monument on the mountain's peak and is drawn into the chamber where Cecil became a Paladin. His reflection attacks him and prevails, fleeing the mountain. Kain conceals his identity while he seeks out and kills his dark side. Once he defeats his doppelgänger at Baron, the spirit of Kluya inside the monument imbues Kain with light to transform him into a Holy Dragoon.

In Porom's Tale, Porom travels the mountain to find Kain when the Lunar Whale rises to the Red Moon and the Mysidian Elder grows concerned for the village's safety. Porom's party finds Dark Kain and mistakes him for the true Kain, and they return to Mysidia with him.

In Edge's Tale, Tsukinowa pursues Porom up the mountain as she seeks Kain, then returns to Edge when he sees the Tower of Babil glowing.

In the Lunarian's Tale, Kluya prays with Fusoya and Golbez to call the Lunar Whale to come to them.

It is found on the mountain's summit, and is the only way to the holy grave. Scarmiglione blocks off the party twice, and the player must defeat his two forms to start Cecil's trial.

The grave is found in the mountain's summit, and this is where Cecil becomes a Paladin. In the New Game+ mode in the 3D versions, after the events of the Giant of Babil, the player can return to this site where the archfiends' malice is anchored, and fight the superboss Geryon.

In the mobile and PC versions of Final Fantasy IV, the player can embark on a quest to find Eidolons scattered around the world. The second Eidolon is in Mount Ordeals, seeking a "great view". He is in the corner near the save point.

In the 3D versions, if the player goes to the top of Mt. Ordeals after the events at the Giant of Babil, at the spot Cecil became a Paladin the party can observe the tombstone that states that the archiends' malice is anchored to that place. Should the player wish to face it, a battle with one of the superbosses, Geryon, initiates. The boss can be fought repeatedly.

The eponymous leitmotif for this area, "Mt. Ordeals," prominently features percussion pounding out a steady marching beat and an upbeat, heroic string section. It features Cecil's leitmotif, "Red Wings", which ties to the story of Cecil climbing Mt. Ordeals to seek redemption. It can also be heard while climbing Mt. Hobs.

Mount Ordeals is the only location featured in the Challenge Event Light Against the Darkness and its re-issue.

Battle background in the Cabin (SNES).

Battle background in the Cabin (GBA).

Battle background in the Cabin (PSP). 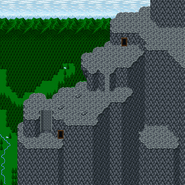 Mount Ordeals on the overworld (GBA). 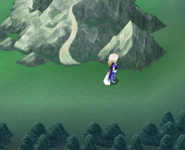 Mount Ordeals on the overworld (DS).

Mount Ordeals on the overworld (PSP).

Mount Ordeals on the overworld (PSP).

Mount Ordeals on the world map in Final Fantasy IV: The After Years (Wii).