Final Fantasy Wiki
Register
Don't have an account?
Sign In
Advertisement
in: Locations in Final Fantasy: The 4 Heroes of Light, Mountains

Mount Gulg (The 4 Heroes of Light)

Mount Gulg (グルグ火山, Gurugu-kazan?) is a dungeon in Final Fantasy: The 4 Heroes of Light. The volcano is located in the mountains north of the city of Arbor. The volcano's interior has certain floors covered lava, which damages party members when they walk on it, so players should bring some healing items and spells. The dungeon's name is a reference to the original location from the original Final Fantasy.

As Belphegor attempts to steal Arbaroc's body, Torte tries to stop him, but he is knocked unconscious. The party interrupts Arbaroc's battle with Belphegor and they manage to destroy him. With Belphegor destroyed, the city of Arbor is finally at peace.

The typical dungeon theme, "Cave of Wraiths" (あやかしの洞, Ayakashi no hora?) is the location theme for the Mount Gulg. The track can be found in the original soundtrack as Track 9 and is composed by Naoshi Mizuta.

Mount Gulg on the World Map. 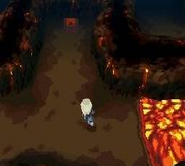 Inside Mount Gulg.
Final Fantasy: The 4 Heroes of Light
Community content is available under CC-BY-SA unless otherwise noted.
Advertisement