Mount Gulg, also known as Mount Gulug and Gurgu Volcano, is a location from the original Final Fantasy. It is located near Crescent Lake, and is accessible only by canoe.

The volcano's interior is mostly lava, a type of damage floor that hurts party members as they walk on it. Several of the sublevels' staircases are difficult to find, requiring treks through huge lava-filled expanses. Other levels involve navigation through maze-like rooms with multiple dead ends and treasure chests. Most of the enemies in Mount Gulg are Fire-based, so the party's Black Mage or Red Mage should make use of Blizzard and Blizzara spells.

After meeting Lukahn at Crescent Lake, the Warriors of Light head to Mount Gulg to destroy the Fire Fiend Marilith. After defeating her at the crystal room, they restore the Fire Crystal.

Mount Gulg is mentioned in the errand "Molten Maiden":

Mount Gulg has not erupted for nigh on 5000 years, yet dangers enough remain that few dare venture near. But we did, and it was at the bottom of that deep, dark shaft we saw her: a lady of flame! Locals tell of a young girl who stumbled over the volcano's rim, thought the truth of it we could not say. Nonetheless, we erected a small shrine and offered prayers for the Mount Gulg Maiden.

The iconic Mount Gulg can be found in story mode overworld, at the Ancient Volcano Ring - Gulg region. It appears as a giant peak with an icy summit surrounded by a frozen lake and forests, mirroring its appearance in the original Final Fantasy. The Gulg Gateway lies here and is the site of a boss battle in all its appearances. The Gateway is the site of the final battle of Chapter 1 of Light to All when Cloud confronts Sephiroth, alluding to the Northern Cave of Final Fantasy VII.

Mt. Gulg appears as the FMS for its titular theme.

Mt. Gulg is the FMS for its theme and "Find Your Way"*(from Final Fantasy VIII), the latter being an allusion to the Fire Cavern.

The Circle of Sages at Crescent Lake tell the warriors of the crystals and of Chaos. The Warriors of Light make their way to Mount Gulg to face the fire within.

Mount Gulg is a dungeon in the Final Fantasy realm.

Since appearing in Final Fantasy, Mount Gulg has become something od a recurring location in the series. It is also alluded to in some games, like in Dissidia 012 Final Fantasy, there is a trade material called "Gulg Steel". A region of Balamb in Final Fantasy VIII is also named "Gaulg Mountains". 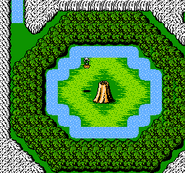 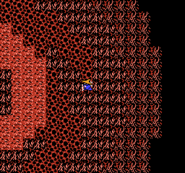 Mount Gulg, as seen in the World Map (PSP).

The Fire Crystal at Mt. Gulg (PSP and iOS).

Gulg Volcano in World B in Dissidia 012 Final Fantasy.