Cid Pollendina: Oh, shut up and help me remodel the Mount Duergar page!
Please expand this article into a full one. The following tasks need to be completed:This request can be discussed on the associated discussion page. Remove this notice upon completion.

Mount Duergar, also known as the Dwarves' Cave, is a location in the original Final Fantasy. It is here where the Dwarves reside. Mount Duergar is located at the western edge of the Aldean Sea.

The Warriors of Light use the Nitro Powder obtained in Castle Cornelia here in order to blow up the land bridge, creating a trench, allowing them to get to Melmond and the Cavern of Earth.

Later, they return here to hand the Adamantite found in the Flying Fortress to Smyth, so that he can create the legendary sword Excalibur.

The party needs to use the Nitro Powder obtained in Castle Cornelia to destroy the land bridge, allowing them to reach the outside world.

This section about a quest in Final Fantasy is empty or needs to be expanded. You can help the Final Fantasy Wiki by expanding it.

The Duergar Mountains appear in the Shadowbringers expansion as a zone in Kholusia, near the Komra village. The mountains serve as the scenario of the YoRHa: Dark Apocalypse storyline, being destroyed by the white androids revealing the Puppets' Bunker in their depths.

The Background Theme that plays inside Mount Duergar is called "Matoya's Cave". 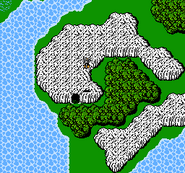 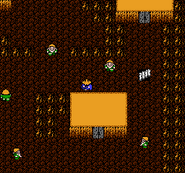 [view · edit · purge]"Duergar" is the name used for a sub-race of dwarves in Dungeons & Dragons, acting as an evil species of dwarf in the same manner as drow to elves.