Motorcycles and hoverbikes are a mode of transportation in the Final Fantasy series. Their most major appearance is in the Compilation of Final Fantasy VII where, functionality wise, they operate roughly the same as real-world motorcycles. However, their design is radically different, and in Final Fantasy VII: Advent Children, motorcycles are capable of maneuvering in ways no real motorcycle possibly could.

Cloud Strife rides a display motorcycle of Shinra make out of the Shinra Building leading into a minigame in which Cloud must ride behind a pick-up truck carrying the other party members while using his sword to attack pursuing Shinra Electric Power Company troops on their motorcycles. The motorcycle minigame when escaping Midgar was the first idea for a minigame for Final Fantasy VII.[1]

The minigame can later be replayed at the Gold Saucer Wonder Square, where GP and a Speed Source are awarded for a high enough score.

Cloud, Jessie, Biggs and Wedge ride down a train tunnel on motorbikes in Chapter 4, "Mad Dash." They are accosted by Shinra troops and the player must dispatch them while conserving health by avoiding damage to both themselves as well as to Biggs and Wedge's bike. The boss of this segment is Roche who has further means of attack compared to the regular Shinra bikers, and who alternates between attacking from afar and swerving near the player where he can be hit.

Motorcycling is also present in the first part of Chapter 18, "Destiny's Crossroads." Like in Chapter 4, the player needs to take out enemies while conserving his health and protect the Shinra pickup truck. This segment is harder than in Chapter 4, with wider variety of enemies. The boss of this segment is M.O.T.O.R., a mechanical weapon with various abilities that require a lot of evading.

Cloud on the Hardy-Daytona statue

comes with the special edition of the game. The Chapter 4 bike is also available as merchandise in some Play Arts Kai sets with Jessie

Cloud's motorcycle is the Fenrir whose wheels are much wider than a normal motorcycle's, allowing it to remain upright even without a rider. It has a series of retractable compartments in the front that Cloud stores the Fusion Swords in. Cloud's acquisition of the bike is covered in On the Way to a Smile, in which he trades for it to help with his deliveries, agreeing to the unspecified original owner to give them free food and drink for a lifetime at Tifa's bar.

The remnants of Sephiroth ride unnamed motorcycles that have three large pipes emerge over the rear wheel and a series of other pipes that cover the vehicle otherwise; they are not exhaust pipes and are merely cosmetic. Designer Takayuki Takeya has said he designed their motorcycles "without a face," which gave them character, and admitted he "never really thought about what made [it] move. If I did, I'd be stuck thinking about it all day." In a scene in Advent Children Complete, it is shown that some type of rapid-fire guns are mounted on the sides of the wheel on the motorcycles' front.

The motorcycles can maneuver in unrealistic fashion; in one scene, Cloud, Loz, and Yazoo loop and turn around each other effortlessly, sliding and even riding backwards at times, in ways no real motorcycle possibly could without sustaining severe damage. Cloud destroys one of the remnants' motorcycles and a second is blown up by the Turks. The motorcycle belonging to Kadaj is unaccounted for, as he abandons it before fighting Cloud one last time.

Cloud rides the Fenrir during the Battle of Midgar, and other motorcycles are used by the World Regenesis Organization. Hoverbikes are ridden by enemies called Pegasus Riders.

There are two motorcycles: the Hardy-Daytona seen in Final Fantasy VII that is in the Shinra Building, and an unnamed model with a sidecar, the latter of which Zack uses to transport a catatonic Cloud.

The motorcycle was at the forefront of the game. The player could choose which motorcycles to use, and customize them with Materia.

Galbadian soldiers ride motorcycles in the Battle of the Gardens, driving them off ramps to launch onto Balamb Garden. The Galbadian motorcycles have rockets strapped to their rear wheels to help propel them. The ramps which they drive off likely have a launching system as well.

Not a motorcycle, but a similar vehicle called a hoverbike is used by Balthier, Fran, and Vaan to make their getaway from the Royal Palace of Rabanastre. As it is disabled by the Goddess's Magicite, the engine gives out and the party becomes stranded in the Garamsythe Waterway.

A hoverbike is also featured in a promotional artwork ( 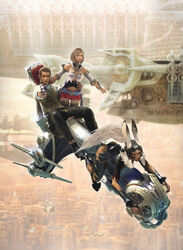 ) of Balthier, Ashe, and Fran.

The Shiva Sisters, Stiria and Nix, can combine into a motorcycle which Snow rides. The motorcycle can perform various attacks, including Shiva's trademark attack, Diamond Dust.

Hoverbikes feature as a common means of transportation throughout Cocoon. In Eden, the party lands on a hoverbike racetrack, disrupting the ongoing race.

The Final Fantasy XIII-2 Ultimania Omega reveals scrapped plans for an extension to Snow's downloadable scenario episode titled "Perpetual Battlefield". Alongside the existing part of the episode in the Coliseum, there would have been a separate minigame in which players would play as Snow as he rode through the Archylte Steppe and the player's objective would have been to try and kill 30 monsters using Snow's skillset—which included being able to spin, drift, jump and use a water-based spell. Once this part of the DLC was scrapped, it was used as a base for the Chocobo Racing minigame in Serendipity.[2]

Snow still rides the Shiva Sisters motorcycle in one of the paradox endings.

Cloud's Fenrir motorcycle from Final Fantasy VII: Advent Children is available as a paid mount. It is faster than other mounts. Previously, many considered it to look a bit slow, but it would have been too fast if the speed had been increased to that of a normal motorcycle.[3]

Solara Aldercapt Antiquum has an unreliable motorbike with a sidecar, which she calls "Regina". After it breaks down she calls Cindy Aurum for advise on repairs, and afterward, Sol and her new friend Lunafreya need to make frequent stops to maintain it. After freeing Lunafreya from captivity in Lestallum, Sol takes her to Insomnia in the motorbike.

The hoverbike is only usable and available while on the World of Ruins. It is acquired in Southwest Town when So-Cho lends the party his hoverbike since it'll help them avoid Su-Zaku's attack. 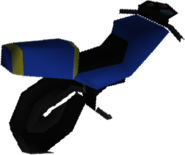 Render of the Hardy-Daytona in Crisis Core. 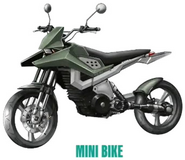 Fran on her hoverbike in Final Fantasy XII.

The Shiva Sisters in Final Fantasy XIII are capable of transforming into a motorcycle.