Motor Ball is a boss in Final Fantasy VII fought after escaping the Shinra Building, immediately after the motorcycle minigame, and the party's starting HP depends on how much damage the player sustained during it. If a party member died during the minigame, they start the battle with 1 HP, but get knocked out straight away as Motor Ball always gets first turn.

-Abilities whose names are not shown when used are highlighted in italics.
-The party cannot escape.
-Back attack against Motor Ball.

Nothing
Star Pendant (100%)
Nothing

The battle will always be a back attack and Motor Ball deals unblockable damage to all party members as soon as the battle begins, which is actually its Highway attack used one-time in the whole battle. Because the battle is a back attack, the battle rows are reversed.

Motor Ball has two forms; Upright form and Flamethrower form. It resists Fire, and is immune to Poison.

Motor Ball's physical attacks are not too strong, but eventually, it shifts to its other form and uses new attacks. It can use Arm Attack on the character who has the highest current HP, and may use this attack twice in one turn. Twin Burner hits the entire party for considerable Fire damage. Motor Ball later uses Rolling Fire, which is an even stronger Fire attack doing around 200 damage. When Motor Ball falls below 1/8th of its Max HP, it switches to its second form immediately, and uses again (if it was already in that form) its two attacks of its Flamethrower form. After that, it continues following its fixed attack pattern for the rest of the battle.

Motor Ball is weak to Lightning.

If the party acquired the Elemental Materia from Domino, they can link it to a Fire Materia in someone's armor to mitigate Fire damage.

Choose All Opponents
Use Twin Burner on Target

Choose All Opponents
Use <Deadly Wheel> on Target

Choose All Opponents
Use <Deadly Wheel> on Target
Count = 5

Choose All Opponents
Use Rolling Fire on Target

Choose All Opponents
Use Deadly Wheel on Target

Choose Self
Use <> on Target
Motor Ball's IdleAnim = Upright Form 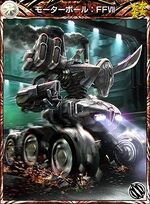 Twin Burner.
Add a photo to this gallery
Retrieved from "https://finalfantasy.fandom.com/wiki/Motor_Ball?oldid=3311493"
Community content is available under CC-BY-SA unless otherwise noted.