Cid Pollendina: Oh, shut up and help me remodel the Mosphoran Highwaste page!
Please expand this article into a full one. The following tasks need to be completed:

The Mosphoran Highwaste is a location in the land of Ivalice in Final Fantasy XII. It is a mountain pass that brings the traveler to the outskirts of the Salikawood. The Esper Exodus, the Judge-Sal can be found in Mosphoran Highwaste.

The Mosphoran Highwaste can be unlocked as soon as the Tomb of Raithwall is completed, but the player will need to rent a chocobo in Nalbina Town stables for a price of 800 gil and approach Gibbs and Deweg while riding it. This will cause Gibbs to abandon his post, and Deweg will follow him trying to persuade him to return. The player can also circumvent the Nalbina blockade via Estersand.

Mighty mountain range standing between Dalmasca and Nabradia. Well-known for its odd rock formations: overhangs forming roofs over the mountain paths, and lone spires of rock jutting toward the sky. In a col between the peaks is a flat area where spring water bubbles from the ground, creating an ideal resting place for weary travelers. The shrines standing in the clearing were built during the Galtean Alliance, the names of the gods they enshrine long since lost to the ken of Man.

The weather is either sunny or cloudy/rain. When the weather is cloudy it can switch between rain and cloudy when zoning through areas within the Highwaste. During rain Fire damage is halved and Lightning damage is boosted.

Fire Elemental comes out during sunny weather in the Summit Path and Trail of the Sky-Flung Stone areas.

In the original version, the treasure in the "town" area, in Babbling Vale, near the entrance to the Skyreach Ridge, can contain the Embroidered Tippet. The north part of the Rays of Ashen Light has a treasure that might have the Burning Bow. The treasure on the southern edge of the Trail of Sky-flung Stone may contain a Headband, and the northernmost treasure in the Northern Skirts area may have the Pirate Hat.

Most treasures on the Highwaste are common recovery items, such as Hi-Potions. With the Diamond Armlet equipped the item treasure is most commonly a Knot of Rust, but the rare treasure can be an Elixir or sometimes a Hi-Ether or a Fang.

Atomos is a Rank III Mark whose hunt becomes available after felling Judge Bergan at Mt Bur-Omisace. Atomos can be found in the Northern Skirts area of the Mosphoran Highwaste and is part of the Jovy sidequest in Nalbina.

The Braegh is a Rank IV Mark whose hunt also becomes available after felling Judge Bergan at Mt Bur-Omisace. Braegh is fought in the Corridor of Ages area of the Salikawood; to get to this area the player must defeat King Bomb in the Grand Bower. It is petitioned by Va'Kansa in the Mosphoran Highwaste.

The Wary Wolf can be found in the Summit Path area. It has a 7% chance of appearing in place of one of the many Worgen and is easily noticeable due to its size.

Grey Molter's spawn criterion uses the game's clock time, appearing when the minute timer displays a number between 10 and 20 (minutes). It spawns in the initially inaccessible western section of Empyrean Way, springing up like all Vipers in the game do. To access this area, the player must have reached the Phon Coast, as this causes the water to flow through the shrines in the Mosphoran Highwaste.

To find the Dheed the player must have spoken to the "Huntmaster" in Phon Coast and defeated Thalassinon, which will start the Rare Game quest. Dheed is then found just before the entrance to the location of the Esper boss Exodus, in Skyreach Ridge. It has a 40% chance of appearing, so the player must exit and re-enter from Empyrean Seat until it appears.

The shrines were built before the Galtean Alliance, although the gods to which honor they were built have since been forgotten. Today, numerous shrines are found across the Highwaste, but not all of them are operational. After fixing the gate in Salikawood that leads to the Phon Coast, the player can return to Mosphoran Highwaste to find some of the shrines working. Using the shrines, the player can build bridges to areas that were inaccessible before. The optional boss and Esper Exodus is found in the area in the middle.

The party will need some Gysahl Greens that can be bought at the Clan Provisioner at the Rabanastre bazaar after reaching the rank Hedge Knight in Clan Centurio, or from Dyce next to the Gate Crystal in Balfonheim Port.

The player can find a red bottle from the fishing minigame with a hint: Foothills rise in mountains' shadow. nhliQsTUrEe. This hints at the northwest corner shrine in Mosphoran Highwaste where the red bottle shatters, yielding a Holy Mote.

"The Mosphoran Highwaste" (モスフォーラ山地, Mosufōra Sanchi?) is the twenty-fourth track on the original soundtrack. Playing at 2:50 minutes, the track is composed by Hitoshi Sakimoto and incorporates leitmotifs from "Opening Movie". The Zodiac Age has a remastered version.

The map can be bought in the Dalmasca Estersand North Bank Village or from the "Scout" moogle in Babbling Vale for 2,400 gil. 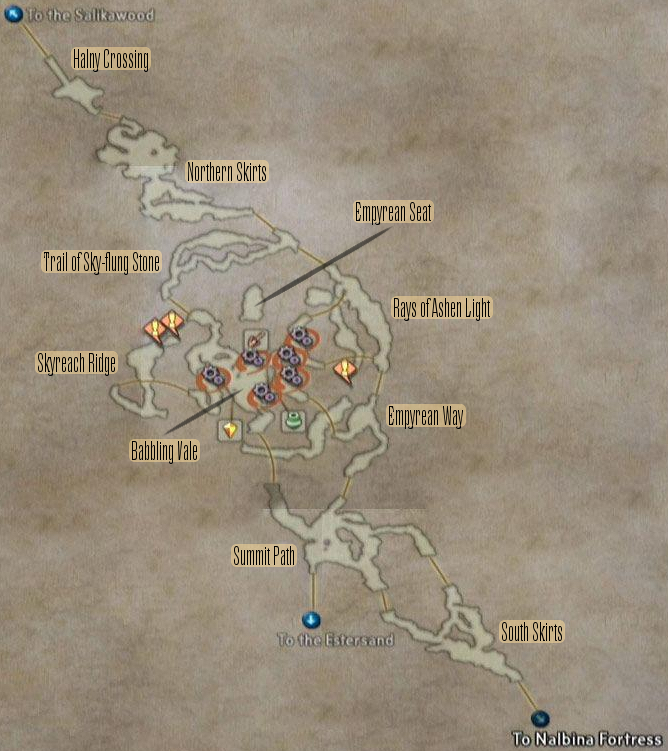 The Mosphoran Highwaste appears as the Field Music Sequence for its eponymous theme. 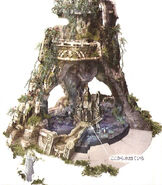