Mace ending in a metal-spiked ball.

The Morning Star (モーニングスター, Mōningu Sutā?), also called Star, is a recurring weapon throughout the Final Fantasy series. It usually appears as a spiked Mace.

The Morning Star is a mid-game weapon with 50 attack power and 70% accuracy. It is classified as an axe-type weapon rather than a mace or a staff. The Morning Star can be equipped by Vikings and Ninjas. This weapon was removed for the 3D remake.

Flail with metal balls attached to its handle. Full power from back row. Can be used two-handed.

The Morning Star is a moderately powerful weapon that the White Mage class can use, and provides 47 Attack, 50 Accuracy, and is long ranged. It can be found in the Great Forest of Moore, or bought in Phantom Village or Great Sea Trench for 7,800 gil.

Weapon with a heavy, steel ball at the end of its chain.

The Morning Star is a basic weapon and is Kefka's main weapon. It has an attack power of 109 and can be bought in Narshe and Thamasa for 5,000 gil. It can be equipped by Terra, Strago, Celes, Relm, and Gogo.

The end of the Morning Star were equipped spike metal balls to cause more damage. It is a plain weapon, similar to Nunchaku, but it is fairly effective.

Morning Star is a weapon for Selphie, that provides 15 Attack, 99 Hit Rate and costs 200 gil to model with Steel Orb x2 and Sharp Spike x2.

Morning Star is a one-handed hammer with an Attack power of 95. Like all hammers it deals random damage and has 7% chance of dealing multiple hits. Like all hammers it has 2.63s charge, and 1.2s action time, making it average what it comes to attack speed. It can be purchased for 13,500 gil in Balfonheim Port, and is also a rare drop from Ose. It requires the Axes and Hammers 5 License for 35 LP to equip.

In the Zodiac versions, it provides 100 Attack, 2 Evade, 32 CT, 8% combo rate, and requires the Axes & Hammers 5 license for 60 LP. It can be equipped by the Foebreaker class. It can be bought in Balfonheim Port for 10,000 gil, found as a treasure in Feywood (The Edge of Reason), or dropped by Ose (3% chance).

A large spiked metal ball attached by chain to a wooden pole.

The Morning Star appears as the strongest mace purchasable, appearing in Chapter 2. It costs 9,000 gil, and has an Attack power of 16. It can also be found as a rare treasure in Mount Germinas with the Treasure Hunter ability.

Morning Star is a mace that provides +33 Attack, +2 Magic, and +5 Resistance. Only the Sage and Alchemist can equip them, and teaches the ability Magic Pow+ to only the Alchemist. It is obtained as a random reward for completing a mission.

The design of these thorned battle maces was inspired by the common thistle.

Morning Star is a high-ranked weapon that provides +38 Attack, +2 Magick, and +5 Resistance. It teaches the ability Scathe to the Sage. It costs 3,680 gil, and can be obtained at the Bazaar by trading a Windgod Crystal, Mysidia Alloy, and Kalos.

Morning Star is a high ranked mace that boosts Strength by 16 and Range by 3, but lowers Agility by 3.

The Morning Star is the weapon of choice for Reuben. It is classified as an axe weapon, rather than as a mace.

Star has a mace icon before its name. It has an attack power of 30 and is obtained after defeating Cyclops in Mt. Rocks.

The Morning Star is a level 92 weapon exclusive to Terra that increases Attack by 61, Bravery by 38, EX Mode duration by 30%, and EX Core Absorption amount by 15%. It can be obtained by trading a Chain Flail, Revival Tree x5, Amplification Crystal x5, and 29,570 gil.

A club with a spiked ball at the end of it that proves surprisingly sturdy and wieldy.

Morning Star is a hammer that can be equipped by Kamo.

The morning star can be purchased from a Merchant in Grandport. 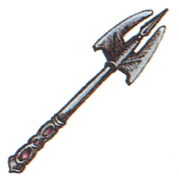 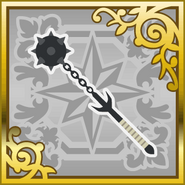 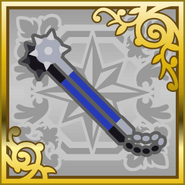 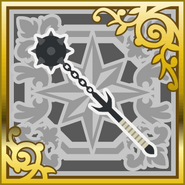 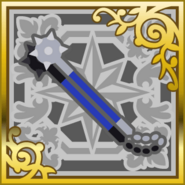 [view · edit · purge]Morning stars are a form of medieval weaponry, resembling a mace with many spikes protruding out of the "head" of the club, which is attached to the handle by a chain. They wounded using a combination of brute bludgeoning force and punctures from the spikes. They could also be swung over or around shields and pierce armor.