Detects by Sound
List of Morbol Enemies
Morbol, or "land octopuses", are yet another variety of Vana'diel's dangerous plantlife in Final Fantasy XI. They can spew two forms of semi-gaseous concoctions on those who dare to come too close, leading to a wide range of status ailments.

Morbols are known to carry some pieces of not-so-rare-but-usable-armor. For example, those found in Pashhow Marshlands carry the useful Dodge Headband, those found in Ordelle's Caves can be spotted with a Shield Pendant, those in Davoi carry a massive great sword, and those in Eldieme Necropolis utilize the Avenger's Earring. The more common drops from this family include Lacquer Tree Log and Malboro Vine, both of which can be of value—the vine being used by alchemists and the log by woodworkers.

An NM model for Morbol 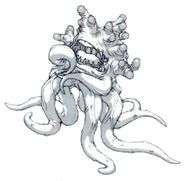 [view · edit · purge]"Malboro" may derive from the Japanese onomatopoeia boro, the sound of an upset stomach. The word mal means "something bad" or "illness". The name could also be a reference to Marlboro Cigarettes, since the creatures often spew horrid fumes.