Babil Tower: Something up Top

aoki
Mootie, Eidolord is a neutral-elemental Eidolon from Final Fantasy Dimensions II. The signet appears exclusively in the premium release of the game. This version of Mootie can be obtained as a signet for Morrow to equip as the completion reward for defeating Proto-Babil on the final floor of Babil Tower.

Mootie, Eidolord is one of Morrow's strongest signets, providing Morrow with balanced values for all his stats. The signet's passive allows Morrow to become completely immune to instant death attacks such as Death. Lastly, the signet's Tera Flare ability is Morrow's strongest magic ability, dealing four neutral-elemental magic attacks to all enemies. However, due to it being the reward for defeating the game's superboss, the signet could be seen as more of a novelty item, but its boosts in stats can help in rematches of previous Babil Tower bosses.

All Mootie, Eidolord signets depict Mootie with the full power of the Eidolord. Mootie in this form is depicted as an adolescent, having more adult-like proportions in his overall design. Similar to Eidolon Mootie, Mootie's crown changes on his right horn and his tail gains a golden ornament. In addition, Mootie's tail ornament gains a crystal-like attachment and he also gains a golden anklet on his right foot. The artwork borrows the color schemes from Eidolon Mootie's artwork, with Mootie changing between light-purple and peach colors.

Mootie, Eidolord's final form depicts a light-purple skinned Mootie surrounded by azure flames. He has a crown on each horn and he gains a pendant around his neck. Lastly, he gains a red crystal on his forehead.

In the original free-to-play versions, the original name for the Eidolon Mootie summon was (幻獣神タツノコ, Genjū -shin Tatsunoko?, lit. Phantom Beast God Dragon Child), the same name as the Mootie, Eidolord signet in the premium release of the game. This was changed with the Eidolon Mootie signet becoming (幻獣タツノコ, Genjū Tatsunoko?, lit. Phantom Beast Dragon Child) in the Japanese version of the premium release. 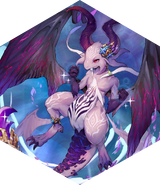 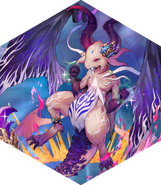 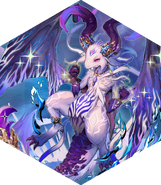 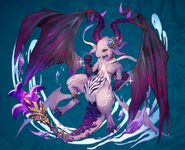 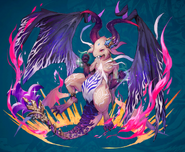