aoki
Eidolon Mootie is a neutral-elemental Eidolon from Final Fantasy Dimensions II. It is the form taken by Mootie during the finale of the Crystal of Time arc to defeat Chaos Bahamut. This version of Mootie can be obtained as a signet for Morrow to equip as the completion reward for completing Morrow's fifteenth episode, "Endless Adventures".

Eidolon Mootie provides Morrow with balanced stats for his attack, magic, and speed. If obtained the moment it becomes available at the start of the Eureka arc, the player can take advantage of Eidolon Mootie's Pico Flare abilities, as it deals seven magic attacks to all random enemies, but is more helpful in dealing seven strikes to single enemies, such as story bosses. Its passive of having a 20% chance of Morrow surviving a fatal attack at 1 HP can be somewhat useful if the passive is activated in a situation with bosses that deal fatal attacks to the party. However, its summon attack is somewhat lackluster compared to other debuffing summon attacks. Eidolon Mootie can eventually be replaced by later game neutral elemental signets.

Eidolon Mootie in all his signets depicts Mootie with the full power of the Eidolord in his infant form. The default signet is similar to Mootie's default forms, although his crown changes on his right horn and his tail gains a golden ornament and its tip changes to light purple. His second form depicts him with peach-colored skin and his horns grow larger with flame patterned designs on the ends. Eidolon Mootie's final form depicts a light purple skinned Mootie surrounded by flames. He has more elaborate crown and tail gold ornament, his wings and horns grow larger, and he gains a pendant around his neck.

Eidolon Mootie's summon attack is Kyu Kyu!, which lowers the attack, magic, and speed of all enemies for two turns. In addition, it delays their next action. Summoning Eidolon Mootie costs 2 bars from the Summon Gauge.

In the original free-to-play versions, Eidolon Mootie's signet could only be obtained by participating in the "Chaos" raid event. He taught the same abilities as in the premium version, but the signet rank was determined by the player's participation in the raid event. Eidolon Mootie was an EX ranked signet.

In addition, the original name for the summon was (幻獣神タツノコ, Genjū -shin Tatsunoko?, lit. Phantom Beast God Dragon Child), the same name as the Mootie, Eidolord signet that appears only in the premium release of the game. This was changed with the Eidolon Mootie signet becoming (幻獣タツノコ, Genjū Tatsunoko?, lit. Phantom Beast Dragon Child) in the Japanese version of the premium release. 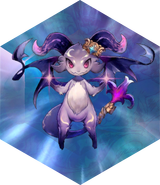 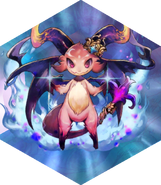 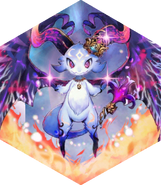