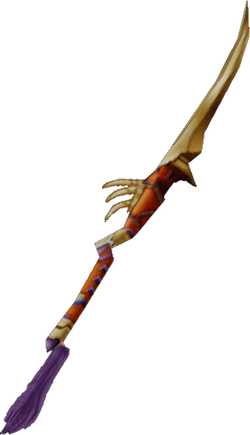 The Moore Branch (ムーアの小枝, Mūa no Koeda?, lit. Moore Branchlet or ムーアの剣, Mūa no Ken?, lit. Moore Sword) is a recurring weapon in the Final Fantasy series. It is the signature weapon of Exdeath, and appears as his primary weapon in virtually all of his appearances. It is a cross between a staff and a sword.

Exdeath wields the Moore Branch as his weapon, visible in his battle sprite.

Exdeath appears in the Deltascape V4.0 dungeon, where he wields the Moore Branch.

The Moore Branch is used by Exdeath when called as a summon.

Exdeath wields the Moore Branch as his weapon in battle. Exdeath Manikins wield crystal versions of the weapon, colored blue.

The Moore Branch is a level 92 exclusive weapon for Exdeath. It gives +62 ATK, +38 Bravery, and boosts his current Bravery by 15% when he blocks an attack.

The Moore Branch appears as both Exdeath's in-battle weapon and a piece of equipment. The equipment piece is now a Level 90 weapon that gives +62 ATK, +34 Bravery, and boosts Exdeath's Bravery by 7% on a block.

The Moore Branch is Exdeath's default weapon. Like all other characters' weapons, equipping it offers no advantages or disadvantages.

The Moore Branch is a Rank 5 rod. At level 20, its default maximum level, it provides 50 Attack, 117 Magic, and 61 Mind. Through combining and reforging it can reach a maximum level of 35, where it will have 66 Attack, 143 Magic, and 74 Mind. It contains the Grand Cross Soul Break for Exdeath.

The weapon is named after the Great Forest of Moore, the forest where Exdeath was born. The name of the weapon may mean it is part of the original tree that Exdeath spawned from.