15-30
The Moonfire Faire, formerly known as the Firefall Faire, is a seasonal event held in Final Fantasy XIV every year during summer in the north hemisphere (although due to the timing of the A Realm Reborn relaunch, the 2013 event was extended into early autumn). It offers players unique rewards, such as swimsuits, after the completion of certain quests.

By now no doubt all have heard of the Firefall Faire being prepared for in Eorzea's cities. But tell me this—do you not find something strange about these festivities? Why, I ask, in the midst of these the year’s hottest days, must we be forced to look upon balloons fashioned in the likeness of bombs, and everywhere reminded of this unbearable heat from which we constantly seek even the briefest of respites?

During a heat wave, citizens living on the outskirts of coerthas started reporting the appearance of unknown creatures made of fire near their settlements, falling from the skies like meteor showers and burning everything in their wake. The Ishgardians named those creatures "Bombards", but their existence was never truly believed.

However, as more and more people talked about similar appearances all over the realm, a mysterious group known as faire chaperones used the festivities of the Firefall Faire to fool adventurers into joining a Bombard hunting group, offering "fireproof" gear to those that agreed to help eliminating the bomb menace.

To start the event, players simply had to speak with any of the Firefall Faire chaperones, who appeared in each of the three city-state and accept their quest. After that, all that was needed is go to any of the Hamlets all over Eorzea and speak to the dispatched Cascadier NPCs to begin the "battle" against the Bombards and acquire their ashen remains.

To defeat the bombards, players had to find one of them near the hamlet, target the bomb and use any of the following emotes to enrage it and lead it into one of the furnaces placed in the hamlets to incinerate them:

Every once in a while, a group of monsters would spawn and attack the bomb. If the bomb took too much damage, it would explode and the mission end in failure.

The bomb ash obtained by the event could then be traded for the "fireproof" gear, swimsuits. Each hamlet dropped a different bomb ash color, and each swimsuits required different bomb ash combinations. After obtaining all items, players gained access to a special wallpaper on the lodestone, featuring their character equipped with a swimsuit.

The rewards from the 2011 Faire were made available again in 2013, and the swimsuit is set to be re-introduced as a Veteran Reward in A Realm Reborn.[1]

But now that the innocent mask of the Moonfire Faire has been stripped away, who in full possession of their mental faculties would willingly volunteer for Bombard battle duty?

The Bombards were thought to have been completely eliminated after the efforts of the faire chaperones. However, during a new heat wave, the creatures raised once again out of the ashes left behind in the aftermath of the previous invasion. Once again, the faire chaperones resorted to using the Firefall Faire festivities to recruit adventurers, this time offering rare garments from the East as rewards to those who joined the Bombard hunting groups.

To start the event, players simply had to speak with any of the Firefall Faire chaperones, who appeared in each of the three city-state and accept their quest.

This time, the Bombards appeared in the camps near the city states, and had to be defeated by using the /firedance emote when targeting them. Defeating a regular bombard required 1 dance, while the King Bombards required 3. After all bombs were defeated, players could get up to 20 bombard ash as reward, which could be traded for Yukatas or Bombard Blooms (fireworks).

All rewards from the 2012 Moonfire Faire are no longer obtainable.

Before the fall of Dalamud, which would bring about the end of the Sixth Astral Era, a Bombard invasion set ablaze panic in the hearts and minds of the people, threatening to reduce our cities to smoldering rubble and ash. Thanks to a band of adventurers who unwittingly joined the Cascadiers, the igneous invaders were vanquished, and the realm was spared a fiery fate, or so reports had us believe.

There has been talk of sightings around Costa del Sol in eastern La Noscea. However, one must always be wary of the whispers of sailors. Ever wont to make sea hares into giant sea serpents and moat carp into mermaids, their wild fabrications have led many an adventurer to misfortune and abashment. Although these were but simple rumors, I would be remiss to overlook reports now coming in from all corners of the realm. Talk of Bombards has spread like wildfire, and for the first time in five years, the Adventurers' Guild has announced the return of the Moonfire Faire.

Five long years have passed since the fall of Dalamud, and a new generation of adventurers has taken up arms in the absence of the Warriors of Light. But would they be so foolish as to run headlong into the proverbial oven that is the Moonfire Faire? There's no mistaking the Cascadier officers thronging the streets with their pamphlets, permeating the air with platitudes and empty promises. It may not be long before even you, dear reader, come face to face with these ardent recruiters.

Though times may change, the insatiable desire for exotic garments and gear shall ever persist among adventurers. A sense of yearning can be seen burning bright in their eyes at the mere mention of garbs they would receive in preparation for battle. The Adventurers' Guild is sure to entice adventurers to heed the call of the Cascadiers, but will it be enough? I can only hope the whimsical farce known as Moonfire Faire will both drive off this incendiary incursion and bolster our spirits.

At last we welcome the tidings of summer─the warm glow of the sun, glistening in the crystal blue waters of the Rhotano Sea; the chirping of birds and the humming of busy bees; and the festivals by which we celebrate the season. Though a time for mirth and merriment to be sure, summer also gives us pause, for the memories of bombards and their onerous assults still burn brightly in the minds of many and more.

Given time, these fiery visions of the past would fade, but not before the Adventurers' Guild announced the revival of the Moonfire Faire. With nary a bombard in sight, the people of Eorzea are baffled by its return. As the premeire purveyor of truth in Lominsa, it is the duty of the Harbor Herald to dispel the fog of rumors that clouds the guild's motives.

After speaking with several members of the Adventurers' Guild, it would appear that a fellow by the name Haermaga is behind the festival's return. In fact, my sources say he has donated a fair deal of his own coin for its funding. But why go to such great lengths to rekindle the flames of a festival that has long since lived out its purpose? I asked this very question to a representative of the Adventurers' Guild.

As you may know, the Moonfire Faire was first held five years ago as an initiative to drive out an incursion of bombards─fiery fiends that meant to reduce the realm to ash. Although the foul creatures have not returned, the Moonfire Faire was, in a manner of speaking, always meant to be a joyous occasion. We feel that is reason enough to hold a summer celebration. A host of events are planned for this year's fair, giving townsfolk the opportunity to better acquaint themselves with the guild, and see what it truly means to be an adventurer. There is more to our work than battle and spoils, and hopefully the people of Eorzea will come to understand that.

They claim this to be an appeal to the masses, but the allure of the faire in previous years was just as sweet. Lacking the impending threat of fiery oblivion, we can only wait and see what surprises await in this year's Moonfire Faire.

The players had to speak to any of the Moonfire Faire chaperones, who will appear in each of the three city-states in order to start the quest.

The realm now basks in the golden glow of the summer sun, its cities adorned with balloons and streamers. And the glittering flash of fireworks over the shores of Costa del Sol can only mean one thing—the Moonfire Faire, the fiery festival by which we celebrate the season. Hosted by the Adventurers' Guild, they mean to help the people of Eorzea grow more familiar with their deeds. But alas, this year they are understaffed, and want for assistance. To those who would ensure the celebration is a sizzling success, pray seek out Haermaga, grand chaperone of this year's Moonfire Faire.

The players have to speak to Haermaga in Limsa Lominsa - Upper Decks to participate in the events.

Come on Eorzea! It's posing time!

Preparations for the Moonfire Faire are all but complete, and Mayaru Moyaru is seeking help to add an extra bang to the festivities. Those with a burning passion for the summer festival are encouraged to seek him out and see how they can contribute to the celebration.

Special FATEs will appear in the area surrounding Costa del Sol over the course of the seasonal event. Completing these FATEs will reward players with Faire vouchers, which can be exchanged for various goods.

Beat the Heat at the Isle of Endless Summer!

The Moonfire Faire is off to an explosive start, and Mayaru Moyaru is eager to tell anyone and everyone about the exciting new venue for this year's festivities. Those eager for a reprieve from the adventuring life are encouraged to seek him out and learn how to partake in the celebration.

Players must first speak with Mayoru Moyaru at Limsa Lominsa - Upper Decks, who will direct players to Haermaga at the Isle of Endless Summer in Eastern La Noscea. Players can perform repeatable quests or participate in event FATEs to obtain Faire Voucher XXVII to trade for rewards.

Push your acrobatic abilities to the limit!

This year, they have gone far beyond the usual assortment of colorful baubles and banners, devising a series of challenges that allow glory seekers to demonstrate their bravery before admiring onlookers. But be warned─only those possessed of a strong pair of legs and a stomach for dizzying heights may hope to conquer this most death-defying test of acrobatic prowess.

Look, Leap, and Live it Up!

This year’s event marks the return of the Eorzean Nimble Warrior course, revamped to provide yet more high-flying thrills to acrobatically adept adventurers. Succeed in conquering this formidable challenge and you’ll earn not only the admiration of your audience and peers, but also the opportunity to acquire a host of exclusive seasonal items.

Mayaru Moyaru is grinning from ear to ear, and yet something in his eyes suggests this year's celebration is not all smiles and sunshine. Whatever dangers lurk beneath the surface of this year's faire, event chaperones are not like to turn away a helping hand.

A blazing heat sweeps over the land, and as the cities find themselves festooned with decorations, it can only mean the Moonfire Faire is upon us. Rumor has it the event committee has a special surprise in store this year to keep festivalgoers cool—frosty treats that are guaranteed to please and leave any reservations about spending time out in the sun on ice.

A group of adventurers fending off the bombards (2012). 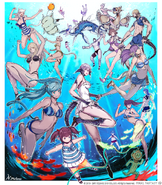 Zhloe, Khloe, and T'kebbe during the 2019 edition.