The Moon (月, Tsuki?) is a recurring plot element of importance in the Final Fantasy series. Some worlds in the series have more than one moon. A red moon is a recurring symbol of usually a malevolent power; in some games the normal moon turns red, but the red moon has also existed as its own celestial body. This may refer to the real world blood moon prophecies extolling the coming of the end times.

There are two moons, one of which is the Red Moon, actually an artificial structure. It is home to the Lunarians, the race to which Kluya, father of Cecil and Golbez, belongs. Cecil, after losing all the Crystals to Golbez, goes to the moon via the Lunar Whale—a flying ship made by Kluya—that allows one to travel through space. The Red Moon is also home to the God of Eidolons, Bahamut, and the Hummingway tribe.

A new moon appears in the sky home to the Creator, an entity that travels the cosmos observing planets as their inhabitants evolve. The Creator judges whether the lifeforms are deserving of living and destroys their planets with his moon in case they are not.

The moon of Final Fantasy V is revealed to be home to Ra Devil, an entity that observed the planet and is planning to destroy it.

The moon is full in the sky when Cloud Strife, Jessie Rasberry, Biggs and Wedge head to visit Jessie's mother on the Sector 7 Plate.

The Moon is the true origin of the monsters and the reason they infest the planet. The event where monsters are brought into the planet is called the Lunar Cry, during which the Moon turns red.

The planet of Gaia has two moons, one red, which actually originates from Terra, and its original blue moon. The moons play a minor part in the late storyline. There is a Tetra Master card dedicated to them.

Spira has at least one moon partially visible in outer space when Sin prepares to unleash Giga-Graviton. A red moon is visible during Yuna and Tidus's scene at Macalania Woods, but it may be the same as the one seen near Spira's atmosphere during Sin's attack.

As Vana'diel's moon orbits the planet it passes through distinct lunar phases, moving from the New Moon to the Full Moon and back through cycles of waxing and waning. One full lunar cycle lasts for 84 in-game days, which translates to 3 days, 8 hours, 38 minutes, and 24 seconds of Earth time. The moon's color varies based on the current day of the Vana'diel week. For example, the moon will appear red on Firesday, but the next night on Earthsday it will take on a yellow hue.

The moon's phase is known to affect certain aspects. For instance, some Notorious Monsters, such as Haty and White Coney, will only spawn during a Full Moon, but others, such as Bendigeit Vran and Black Coney, only appear during a New Moon. An Ark Pentasphere, required for the "Divine Might" quest, can only be obtained during a Full Moon, whereas the quest "Searching for the Right Words" cannot be completed during a New Moon. Various pieces of equipment also provide the player with additional, beneficial effects depending on the moon phase.

Many players believe the moon phase influences several other aspects. The Full Moon is thought to increase the drop rate of loot found on monsters, cause plants grown through gardening to yield better results, and improve the overall success rate of synthesizing items through crafting. Conversely, drop rates seem to be slightly worse as it approaches the New Moon, and crafting is more likely to fail, but instead provides a greater chance of skill-ups and high-quality synthesis results. Fishing results seem to be best on the Full Moon and the New Moon, with results deteriorating slightly as it approaches the Quarter Moon.

In Abyssea, an alternate dimension that exists parallel to Vana'diel, the moon seen in the night sky appears significantly larger. It is revealed that the Abyssean version of Al'Taieu no longer hangs in a paradox state above the planet, but instead of returning to Qufim Island it has ascended to the moon for unknown reasons. After defending the nine Abyssean zones from the fiends that threaten them and defeating the six Caturae, the adventurer can access Abyssea - Empyreal Paradox where they can challenge Shinryu.

The Source was initially orbited by two moons, a large white moon and a lesser red moon named Dalamud. The larger moon is said to be represented by the goddess Menphina, and Dalamud was known as "Menphina's loyal hound" due to its orbital characteristics. The events of the Seventh Umbral Calamity brought Dalamud down unto Eorzea, where it was revealed to be of artificial origin. The larger moon is actually the prison of Zodiark, who was expelled from the planet by the Mothercrystal thousands of years ago.

In A Realm Reborn, only the larger moon remains in orbit. It progresses through lunar phases as Eorzean days pass.

In the stinger at the end of Final Fantasy XIV: Heavensward, Elidibus is seen speaking with the "Warrior of Darkness" on the white moon. He appears there a few more times over several expansions musing on his plans.

In Final Fantasy XIV: Stormblood, Tsukuyomi, Goddess of the Moon, appears as a primal.

The moon is visited by players in Final Fantasy XIV: Endwalker as the area Mare Lamentorum, where it is revealed to be inhabited by a race of beings created by Hydaelyn when she imprisoned Zodiark, the Loporrits. They have worked for thousands of years to turn the moon into a starship to evacuate the planet in the event that mankind cannot stop the Final Days.

The world of Eos has a moon that appears during night as part of the game's day and night cycle. The moon appears modeled after the real world equivalent. The moon is always full.

Lunafreya Nox Fleuret is the Oracle who has the power to fight the Starscourge, the advancement of eternal night. Her name, Luna, means "moon", and she wears a crescent moon pendant. The moon is the only natural light during the dark hours of the day when daemons spawn.

After Luna dies and the Starscourge takes over the world, the moon disappears as well. When Noctis Lucis Caelum returns to the world that has been in perpetual darkness for ten years, there are no stars or moon on the sky.

To create the flow of hours, the developers had to get as close as possible to the real world. They would take a photo of the real sun and blue skies and drop it into the game and employ a system called the Sky System to make adjustments. In the real world there is not one minute, or one second, where light is the same. The sun is 400,000 times brighter than the moon, though impossible for the human eye to detect. To get closer to that in Final Fantasy XV, the sun is set to shine more than 100,000 times brighter than the moon; the exposure is adjusted so that the lighting is always just right within the game.[1]</ref>

Players performing the "out of bounds glitch" in the Final Fantasy XV Episode Duscae demo have discovered an area where the moon increases in size and shines red. A 2014 trailer showed a nighttime scene beyond Duscae bathed in red light, but a scene similar to this is not in the final game.

The special edition PlayStation 4 Slim for Final Fantasy XV has a moon decal on the surface.

The moon in the Episode Duscae title screen.

Red moon in Episode Duscae if exploring out of bounds.

The Crimson Moon is a manifestation of evil created long ago when the God of Light created the planet. When he created the world, he extracted its chaotic evil in the form of a moon. Humans who are influenced by its power become Lunites.

Edo World has a single moon, the party fights Magnate under the crescent moon atop of Edo Castle. The crescent moon in this scene is symbolic. The word crescent is derived etymologically from the present participle of the Latin verb crescere "to grow", thus meaning "waxing" or "increasing". Magnate is collecting MAGI, in order to increase his own power, to become a true God. To do this, he has to defeat the party and claim their MAGI. 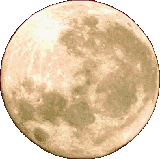 [view · edit · purge]A total lunar eclipse is sometimes called a blood moon, because of the reddish tinge the Full Moon takes on when fully eclipsed, though this is not a scientific term. The blood moon prophecies refer to the coming of the end times, as in the Book of Joel it is written "the sun will turn into darkness, and the moon into blood, before the great and terrible day of the Lord comes".