A mutation of some unknown animal. Details are unclear. Remembers people by licking their blood.

Moombas are a possible final stage in the evolving life cycle of a Shumi in Final Fantasy VIII. They are generally used as slaves or laborers and as such are treated poorly by their human masters; however, in the Shumi Village the Shumi hold Moombas as an ideal. The Sculptor at the village workshop explains that often those who fail to evolve into Elders, turn into Moombas, and that their fur is red due to the "passionate ingenuity of their hearts".

Moombas are covered in red fur and stand at about a meter in height. They get around by running or walking on all fours, but can stand on their hind legs when stationary. Their paws are oversized in comparison to their bodies, with sharp claws which, coupled with sharp teeth, can be used for defense. Moombas cannot speak human language as a whole, but can be taught individual words.[1]

Moombas use expressive body language to convey their meaning to humans, but have no difficulty communicating with other Moombas and Shumi in more animalistic sounds. Moombas can recognize people by smelling or licking their blood.[2] Being the "final form" of a Shumi, Moombas are generally benign, good-natured and hard-working, as this is the most common form a Shumi assumes.

A Moomba can be summoned into battle with the the Friendship item. In the original versions it is obtained with the PocketStation through Chocobo World. In Final Fantasy VIII Remastered Friendship is found via Angelo Search.

A Moomba is friends with Boko. During Boko's journey to rescue MiniMog, and later Koko, Moomba helps search for weapons to raise Boko's attack stats.

The Moomba species is as one of the many types of dolls Lulu uses for a weapon. The Moomba dolls contain elemental magic or affect Magic and Strength stats.

Yuna wields a Moomba doll as her weapon when wearing the Mascot dressphere.

A Moomba, named "Mumba" in-game, is a secret character that can be unlocked after finishing the Story Mode four times, after which Mumba can be selected by pressing

over Squall once he is unlocked. As a CPU racer, he holds attack stones until he gets three and uses them and instantly uses Haste and Reflect stones. 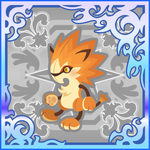 Moomba Warrior appears as a weapon.

Moomba appears as an Ice-elemental summon card. It allows the player to choose one forward and deal it damage equal to that forward's power minus 1000. The Moomba is also an EX Burst card, causing its effect to activate immediately when sent to the Break Zone from the deck. The Moomba card being Ice-elemental may be because Shumi Village is located at the northern Trabia region in the world of Final Fantasy VIII.

The appearance of a Moomba is reminiscent of Red XIII from Final Fantasy VII.

The flashback sequence where Laguna Loire works in the underground section of the Lunatic Pandora Laboratory has two possible versions. In one, the Moomba will fall off the balcony, but be saved due to its safety harness. In the other, the Moomba is about to fall, but is saved from falling in time. Which event happens depends on whether Squall Leonhart lies about SeeD or stays silent when he's being interrogated in D-District Prison much earlier in the game.

An optional Laguna dream depicts his stay in the Shumi Village, where he tried to teach them to talk but they only learned one word, Laguna, which they called out whenever Laguna was in sight. To view this sequence the player needs to complete all sidequests in Shumi Village, and then visit the village workshop when the statue there is finished, which should be ready by the time the next story objective is to fly into the Lunatic Pandora on the world map. When Squall is being interrogated in the D-District Prison, the Moombas that release him call him "Laguna"; they only ever refer to him by this term. The Information section in the menu says that Moombas recognize people by their blood, hinting at a connection between Squall and Laguna.[note 1]

Laguna teaches a Moomba to talk. 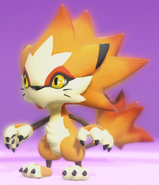