Looks just like a moogle and negates poison, kupo!

Moogle Costume, also known as Moogle Suit (モーグリスーツ, Mōguri Sūtsu?), is a piece or pieces of clothing or other attire that are used to dress up as or pretend to be a moogle.

The party can find a Moogle Costume in the Moogle Village and wear it. One of the houses has a female moogle and a treasure chest, which she only allows the player to open when they are dressed as a moogle.

Moogle Suit is a piece of armor for Relm and Strago. It offers 58 defense and 52 magic defense. The Moogle Suit is not compatible with the Merit Award. While wearing it, the character displays a moogle sprite in battle. If Terra has a Moogle Suit hacked into her equipment slot, and she uses Trance during battle, the Moogle sprite will be overwritten by Esper Terra's sprite. It can be found in Jidoor, stolen from Misty and Blade Dancer, and won in the Coliseum by betting the Chocobo Suit.

Moggie is a boy in the kids' playground on the Sector 5 slums who dresses as a moogle. He hosts the "moogle emporium" shop where the player can exchange their Moogle Coins for goods. His costume resembles the moogle that appears during Chocobo & Moogle summon. He punctuates his speech with "kupo", and claims to be an actual moogle rather than wearing the get-up as a costume.

Moogle Suit is a key item the party can obtain while visiting Lindblum for the first time. A local actor, Lowell Bridges, wears it to escape his over-excited fans from the set of his new play Moogle Wannabe 2. The player can find the suit from the artist Michael's house afterward. It is a missable key item whose only purpose is to count toward the treasure hunter rank.

Yuna wears a moogle costume as a disguise during Leblanc's concert in Luca. If the player gets Episode Complete in every area, they will receive the Mascot dressphere, in which Yuna again wears the moogle costume.

The Moogle Suit and matching Moogle Masque were given away to all winners of the VanaFest Golden Gobbiebag Giveaway, a one-time event intended to hand out selected in-game prizes to randomly chosen players while bypassing potential gambling-related legal issues. Players filled out an entry questionnaire on Square-Enix's website; those who answered the question correctly were potentially eligible to receive the prize items sent to their Mog House delivery box by the MHMU (Mog House Management Union). The suit and the masque may be worn together or separately.

The Moogle Suit itself is a level 1 piece of body armor equippable by all races. It offers 1 defense and restricts the wearer from equipping anything in their hands, legs, and feet armor slots. If worn for at least 30 seconds and then used as an item, once per 24 real-world hours it will dispense one or more Mog Missiles. Mog Missiles are expendable fireworks rockets that when used, streak upward and then burst into a pattern of flickering motes that resembles a cartoon version of a moogle's face.

The Moogle Masque is a level 1 piece of head armor equippable by all races. It offers 1 defense and has no other attributes besides completely obscuring the wearer's face.

There is a card of Wol wearing a moogle costume that looks like Yuna's Mascot dressphere from Final Fantasy X-2.

A Moogle costume was released in November 2014. 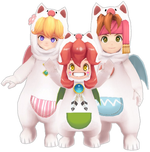 The Moogle Suit costume was a pre-order bonus for the digital version of the 2018 3D remake. It is found within the Options menu.

Yuna in her Moogle costume in Final Fantasy X-2. 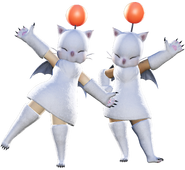