Moogle Village is a village in Final Fantasy V. It is located in a vast forest in the northeastern edge of the continent of Gloceana in Galuf's world. As the name suggests, is inhabited entirely by moogles.

The history of the village is unknown. No moogles are found on Bartz's world, suggesting that all moogles were moved to Galuf's world after Planet R was split in two. Aside from the Moogle Village, one resided in the Castle of Bal and some in the Great Forest of Moore. Awareness of moogles is fairly low; one Regole villager had spotted one and was not believed,[1] and a Moore resident mentioned being helped by a "strange little critter" but could not accurately identify them as a moogle.[2]

Bartz Klauser, Lenna Charlotte Tycoon, Galuf Halm Baldesion, and Faris Scherwiz saw a moogle in a forest south of Regole. After following it through the Underground Waterway, the moogle directed them to the village. Upon arriving, the moogles initially feared Bartz's party, until the moogle they helped told the others what had happened. After this, the moogles contacted Krile Mayer Baldesion through a moogle at the Castle of Bal using their ability to communicate long distances by telepathy.[3]

Later, Exdeath summoned the Void upon the Moogle Village when the worlds were merged as one. After the party defeated Exdeath, the village was restored to normal.

The Moogle Village is located amid a vast forest, surrounded by mountains. The forest is located on the northeastern edge of Gloceana, and is east of a large desert. To the southwest of the village, the Underground Waterway connects it to the rest of the continent on the west.

The village itself blends in with the rest of the forest, as it cannot even be seen on the world map. All moogles reside in treehouses.

The Moogle Village can only be visited in Galuf's world. Though it carries over to the merged world, it cannot be visited due to story events.

The party can find a moogle costume to open the treasure in one of the houses. This allows several items to be obtained:

The background theme of Moogle Village is called "Critter Tripper Fritter". This tune is the moogles' musical theme in the series. 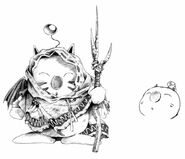