Moogle Rod is a club that provides 1 damage, 288 delay and has an enchantment that gives the targeted member a Moogle Pie. It deals 0.21 damage per second and accumulates 76 TP per hit. It can be equipped by all jobs at level 1. It was available during the the special Final Fantasy XI Fan Festival 2006 event. It was also given to Square-Enix employees and alumni, excluding Game Masters. It makes a 'kupo' sound every time it hits.

Moogle Rod appears as a weapon for Aemo. 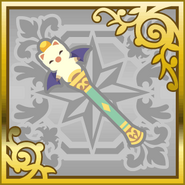