Doll of protection made by Iris. Not even the sweetest sycophant could could claim the grotesque little toy was cute.

The Moogle Plushie is obtained from Iris Amicitia in Lestallum. She acquires it in the Partellum Market during "A Stroll for Two" in Chapter 3, and it can be received in a minor quest after reuniting with Gladiolus in Chapter 8. The player can throw it during battle to distract enemies from attacking the party. It can also be used as a catalyst in Elemancy, though it only bestows a single point of increased power. The Moogle Plushie can be used up to ten times before it must be repaired by Iris, though she will repair it at any time if it has been used at least once.

The player can find the Tattered Plushie for the Documents near the river in the center/north part of town, by a collapsed bridge surrounded by ruins.

A light shield that pulls the enemy's attention. This shield was made by a kind young girl who worried of the perils the prince of Lucis had to endure in his travels. The intended use of this shield is to actually toss it to where one wants to gather enemies.

Moogle Plushie is a Light Shield that is obtained as Iris's Trust Master. It provides 25 DEF, 25 SPR, and increases the user's chances of being targeted by 30%.

A moogle plush based on Final Fantasy Brave Exvius was an obtainable accessory during the "Vision of New Beginnings" collaboration as either an item drop or a gacha prize. When equipped at limit-break 5, the doll grants a 40% chance of surviving a lethal attack with HP > 20%, and a 10% reduction in damage when the user is at long range.

This section about an item is empty or needs to be expanded. You can help the Final Fantasy Wiki by expanding it.

Iris's moogle plushie from Final Fantasy XV can be found in front of a trunk in Layla Hassan's base during the present day scenarios.

Iris is depicted in her bio as holding the moogle plushie.

An official Final Fantasy XV moogle plushie produced by Taito Co. are available from Japanese arcades from February 2018. They are also available online. 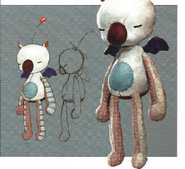