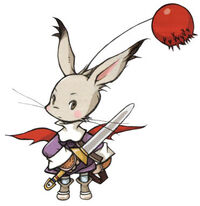 The Mog Knights are small moogle warriors with brave hearts. Mog Knights are the pure powerhouses of the moogle job. They wield powerful blades and they have a nice array of abilities that can give them the upper hand.

While their Attack growth is good, their below average Speed growth can be a handicap unless compensated by either Animist/Black Mage for more magically balanced characters, or Thief for the best Speed growth for moogles. They can be seen as a counterpart to the Fighter, a hume job.

Moogle Knight is a job class for moogles. They wield blades like Fighters and Gladiators. The moogle variation of Ultima, Ultima Charge, is available to this job. Moogle Knights boast great HP, Defense, and Attack unique to other moogle jobs, considering that most of them are poor in physical stat growth so that players wanting a melee moogle unit should turn to it.

The Moogle Knights had strength in numbers when it came to pairing up with a battle party.