It was free, but season pass holders got some extra items. It could be accessed no matter where the player was in the game from the title screen. It whisked Noctis Lucis Caelum to a festive Altissia where he could try out various minigames. The player unlocked a new attire for Noctis that is a carnival-themed re-color of his casual outfit without the jacket. Season Pass holders get a full-on carnival outfit.

Moogles and chocobos are the Final Fantasy series mascots, and the city is decorated accordingly. 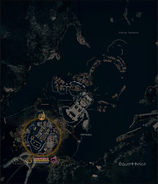 Noctis at the carnival with the Season Pass-exclusive attire.

Noctis and Carbuncle watch the fireworks.