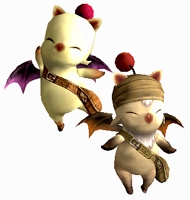 A Moogle resides in every player's home, known as a Mog House in Final Fantasy XI. These Moogles watch over the house and allow access to several options including stored items, gardening, the delivery box and job changing. There are many event festivals that roughly correlate with many real world holidays in both Japan and abroad (e.g., Tanabata is The Summerfest, Valentine's Day is Valentione's Day, Halloween is The Harvest Festival, etc). Moogles coordinate these in-game events and offer various rewards for completion.

Moogles play an active role in the story and progress of the core game as well. Nomad Moogles act as mobile Mog Houses, appearing in secondary and tertiary towns and habitations. One Moogle next to Maat in Jeuno is involved with every level cap increase a player must face after reaching Lv.50; furthermore, another Moogle has more recently appeared to manage the new Magician Weapon augmentation system. More recently, Moogle activity has been on the rise in Vana'diel.

A downloadable add-on expansion entitled A Moogle Kupo d'Etat: Evil in Small Doses was released in 2009, dealing with political turmoil in the Moogles' world, culminating in an unforgettable fight against an unlikely combatant.

Nomad Moogles have limited functionality. They can only change players' jobs and grant them access to their Delivery Boxes, Mog Safes, and Mog Lockers. They are located in Selbina, Mhaura, Norg, Kazham, Rabao, Tavnazian Safehold, and Nashmau. There are also special Nomad Moogles—like the one in Ru'Lude Gardens who assists with Merit Points.

Event Moogles appear only during Special Events, and generally hand out items or equipment related to the special event, like the Initial Eggs during the Easter event.

Error Moogles or "Oops" Moogles are used, when the development team have to warn a character of things, like Auction House malfunctions or other in-game issues. They are placed at the specific "error" areas.

Festive Moogles are Moogles set aside to pass out gifts to people that attended Square Enix special event seminars.

Explorer Moogles are Moogles that provide information about Mog Tablets and provide teleportation services while the Ease of Exploration Super Kupower is in effect.

Bonanza Moogles are Moogles who preside over the Mog Bonanza event.

In the mission "Smash! A Malevolent Menace" in A Moogle Kupo d'Etat, players experience their only opportunity to battle Moogles.