Moogle is a race of creatures in Final Fantasy IX, found all over the world; rather than forming in their own settlements, they often live in towns among the other peoples, and many also live in far-away lands and long abandoned locations no one else steps foot in anymore. Moogles serve a gameplay purpose in acting as save points, hosting shops in places that are far away from towns, and delivering letters via Mognet. Almost every moogle that appears on the field is named.

The moogles might originate from the planet of Terra, as Moorock lived in Bran Bal, apparently having never heard of Gaia. After Garland placed the Soul Divider at the Iifa Tree's base, Terran lifeforms began to revive on the planet of Gaia, as the result of Gaian souls being replaced by Terran ones. Moogles might have been one such lifeform, or, they simply could be a plentiful life form, having naturally occurred in both worlds independently.

During the present day moogles lived all around Gaia, some more solitary than others, though they kept in touch via long distances through a mail-delivery service. Whereas the other Gaian tribes mainly settled the Mist Continent, with only small pockets of civilization existing elsewhere, moogles settled every nook of the world, and even lived on the Forgotten Continent that seemed otherwise entirely uninhabited. Moogles especially proliferated on Madain Sari on the Outer Continent, where they helped the last of the summoner tribe, Eiko. Eiko's pet was a tiny moogle with an unusually colored pom-pom called Mog who often hid inside Eiko's clothes, as she was very timid. However, Mog's true form was that of the eidolon Madeen, and after Mog stood up to protect Eiko and revealed her true form, she stopped appearing as a moogle.

Moogles are small, light-colored and lively fluffy creatures with more brightly colored nose, wings and a pom-pom (a ball at the tip of an antenna) on their heads. Some moogles sport a full mane of fluffy fur, worn like a fur boa around the neck, while others have different colored fur than the usual white; Artemicion is purple with stripes, but it is implied he dyes his fur for vanity reasons. A moogle's attire may indicate gender: males are bare but females wear small, purple coats. Moogles can use their tiny bat wings for flight, though they merely hover a little bit above the ground and do not go long distances.

Moogles speak the human language, punctuating their speech with "kupo" as a verbal tic. The moogles' favorite food is Kupo Nuts. Moogles are often excitable, curious, and exuberant, Stiltzkin appearing among the most stoic of their ilk, not using the "kupo" term, which moogles tend to utter to express enthusiasm. Moogles are friendly, kind, and helpful, though some are quite greedy for food.[note 1]

Though in many places only one or few moogles are ever seen together, many moogles live in the summoner village of Madain Sari alongside the young summoner Eiko. The only purely moogle-run settlement seen is the Mognet Central from where the moogles' mail delivery services is operated. 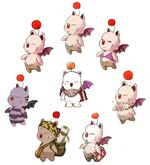 There is also the "Ubobo" moogle character from Lindblum's Moogle Wannabe 2 play. Lowell Bridges wears a moogle costume to escape his over-excited fans disguising himself with the moogle suit. Zidane can find the suit in Artist Michael's atelier afterward as a missable key item.

The only moogles who are not named are Mogmi and Moguta's children in Gizamaluke's Grotto.

Moogles play a major role as save points and can be called with a flute to access the save command on the world map. If the player uses a Tent at a save moogle, a cutscene plays to simulate overnight resting, and the crude structure in which the party sleeps sports a moogle pom-pom.

The moogle the player calls on the world map, named Moguo, can be annoyed to say the following if the player keeps calling it and canceling:

Mogster is the tutorial moogle, found in Qu's Marshes. He first appears in Active Time Events, and later the player can visit him on the marshes to hear more tutorials, though visiting him is optional.

on items and equipment in the menu brings up a help window that provides additional information on item in the form of a "help moogle".

Some moogles man mogshops within dungeons to sell items and equipment. Mogshops appear in locations that have no towns nearby where the player could easily go shopping. Mogshops do not offer synthesis.

The player can collect Kupo Nuts from delivering letters in the Mognet quest, though they can only hold one nut at once. The player gets a Kupo Nut every time they deliver a letter to a moogle via Mognet, provided they do not have one already. Vivi Ornitier gets the first Kupo Nut via an Active Time Event in Lindblum. The nuts can be delivered to a moogle in Gizamaluke's Grotto for items.

If the party visits the moogles in the grotto after the events in Burmecia, there is a little moogle child walking around the room. After the party returns from the Outer Continent, a second child will have been born, and a third child will be born after the party has the Invincible.

Moogles communicate through Mognet, and the player can help deliver letters among moogles as part of a subquest. The letters are not being delivered because Mognet Central's machine has broken down, so the moogles ask the party to deliver their mail. The player can carry up to three letters at a time, and even after the party composition changes due to story events, mail can still be delivered.

When Toshiyuki Itahana came in to replace Tetsuya Nomura as character designer, his moogle concept art was meant to echo that of the previous two console generations[citation needed] (which goes along with the game's development concept as a whole). Itahana's version incorporates previous designs, but in the end renders a completely new moogle with a balloon-shaped head and a vertically oval nose resembling a koala, vastly different from Nomura's feline MiniMog. The continued evolution of Itahana's moogle design carries on in his many Crystal Chronicles titles with his recurring characters, such as Artemicion, whose first appearance was in Final Fantasy IX.

Concept art of a typical moogle. 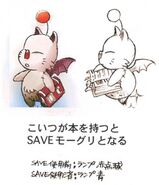 Concept artwork of a saving moogle.

Concept art of a scruffy moogle.

Concept art of a female moogle.

Concept artwork of a maned moogle.