The Moogle is a dark-elemental Eidolon from Final Fantasy Dimensions II. It is one of Morrow's early game signets to equip and can be obtained as a first-time completion reward for the "Materials for New Magic 1" side quest in the Ancient Era White Mage Tower. The signet teaches Morrow his basic healing ability, Festal Cant. Aside from its usefulness in the opening chapters of the game, the Moogle signet is considerably weak.

The Moogle is based on the recurring race in the series. The artworks for the Moogle signet's evolution take inspiration from cover artworks designed by Yoshitaka Amano for the first three titles in the series. The default Moogle signet mimics the pose taken by the Warrior of Light on the cover art illustration for the original Final Fantasy. The second signet artwork is based on the profile illustration of Firion wielding his sword for the original Famicom cover of Final Fantasy II. Lastly, the signet's final artwork depicts the Moogle mimicking the pose taken by the Unnamed Warrior from the original Famicom cover of Final Fantasy III.

The Moogle's summon attack is Moogle Power, which restores HP for all party members and raises their attack and magic for a single turn. Summoning the Moogle costs 1 bar from the Summon Gauge.

The following are the abilities Morrow can learn from the Moogle:

In addition, there were two unique versions of the Moogle summon that appeared exclusively in the free-to-play versions of the game, the Memoria Moogle and the Celebration Moogle. 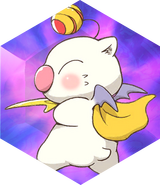 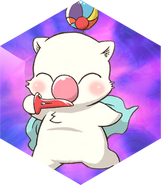 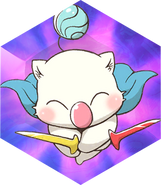 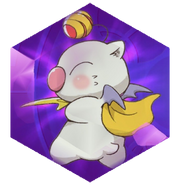 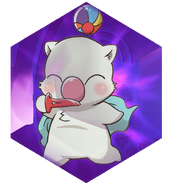 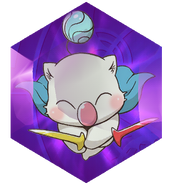