Monsters-in-a-box (敵入りの宝箱, Teki Iri no Takarabako?, lit. Treasure Chest Containing Enemy) are enemies that appear in treasure chests. After the character opens the chest, the phrase "Monster-in-a-box!", "Monsters!", or similar is displayed, and a battle begins with an enemy. Usually these enemies are stronger than average foes, and can even match a boss's strength. Monsters-in-a-box were series staples up to Final Fantasy VIII where they do not appear, and only return to the series in Final Fantasy X.

Appearing only in the 2021 Pixel Remaster release, monsters-in-a-box replace the fixed-encounter tiles used in all previous releases. An exception can be found in Cavern of Earth B1, where the Hill Gigas encounters that once dotted a corridor southwest of the entrance were removed and replaced by roving NPCs. Talking to one of these will trigger a one-time battle. Exiting and re-entering the floor will reset the encounter.

Monsters-in-a-box are common, appearing in almost every dungeon. Unlike later installments, the item is gained before the monster is fought. All types of dragons appear as monsters-in-a-box in some later dungeons and in the last dungeon, Pandaemonium, several of the game's most powerful armor pieces can be found in boss fights with monsters-in-a-box.

Early in the game in Castle Sasune, the party must defeat a monster-in-a-box, a Griffon, to obtain the Wightslayer. In Eureka, a Ribbon is obtained after opening a treasure chest and defeating the Ninja within. During the final dungeon of the game, there is a crossroad of four paths. Each path has a chest along the way, with a Xande's Clone guarding a Ribbon.

This section about an enemy in Final Fantasy III is empty or needs to be expanded. You can help the Final Fantasy Wiki by expanding it.

Many monsters-in-boxes can be fought in Final Fantasy IV. After opening a box, a message saying "Monsters!" will appear and the fight will initiate. After winning the battle, the item contained in the chest will be received.

In the DS version, the word "Monsters!" has been replaced by "Enemy Ambush." If there is an item, the item will be received, followed by the term "Enemy Ambush!". For example, in the Giant of Babil, the message box will say:

It's a trap! Monster attack!

Monster-in-a-box appears when the player opens certain chests, and is commonly strong for the location. Once the enemy is defeated, a message is displayed and the item is received. The superboss Shinryu appears as a monster-in-a-box in the Interdimensional Rift, which guards one of the strongest weapons in the game, Ragnarok. In the GBA and later versions, Neo Shinryu is encountered the same way, guarding the Ultima Weapon.

Though not a monster-in-a-box the fourth fight against Gilgamesh is initiated by opening the chest in the room after the save point in Castle Exdeath; if the player ignores it, they skip the battle and permanently miss out on the Excalipoor novelty weapon.

Several monsters-in-a-box appear in Final Fantasy VI. After opening a chest, the monster event triggers a message saying "Monster-in-a-box!" and the encounter will commence. The treasure is received as an item drop from the enemy. A notable example is Angler Whelk in Darill's Tomb, which drops a strong Holy-elemental weapon for Sabin.

Monsters-in-a-box only appear once in the clock puzzle room of the Temple of the Ancients. They do not give items.

In Gongaga, Zack can find treasure chests that contain enemies. During a mission he will also encounter a treasure chest that will transport him into a battle against Bahamut Fury.

In the Omega Ruins, there are areas where three to five treasure chests are grouped together. Some contain treasure, while others initiate a battle. After the battle, the other nearby treasure chests will disappear. It is random which treasures contain battles.

The treasures contain the following items:

There are several monster-in-a-box chests in the Fiend Colony. The battles that initiate are against Vermin-type enemies.

Patch 2.1 added the Treasure Hunt system, which uses a monster-in-a-box mechanic. The buried treasure coffers have a trap that will release a "powerful musk" when opened that summon monsters. These creatures must be defeated in order to claim the goods contained within.

In the 24-man raid World of Darkness, Xande's Clone appears by opening a treasure coffer dropped by Queen Scylla.

In Confessions of the Creator, red treasure chests initiate battles with powerful enemies when opened, and one in the Southern Lufenia gateway triggers a battle with Feral Chaos. 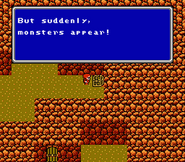