A pugilist is an expert in hand-to-hand combat. Through rigorous training, he forges devastating weapons of his limbs. Having said that, fists and feet don't deal near as much damage as a blade. But what does that matter when you can land several blows for each swing of the sword? Aye, what a pugilist lacks in destructive force, he makes up for in speed and cunning. Rather than trying to deal great damage with a single blow, he pummels his foe with lightning-fast combinations. If you become as good as yours truly, your combinations will be so swift and seamless, folk won't be able to tell when one technique ends and another begins! Hah hah hah!

The Monk is a job in Final Fantasy XIV, introduced as the Discipline of War Pugilist (格闘士, Kakutou Shi?) in the original release. Players start as a Pugilist, and then may upgrade to Monk using the Soul Crystal obtained from the quest Brother from Another Mother after Pugilist reaches level 30. 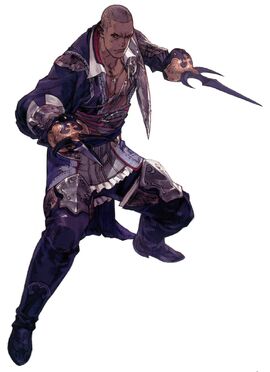 The path of the pugilist is one of incessant training aimed at mastering the traditional techniques of hand-to-hand combat. Though pugilists command formidable power when unarmed, they are wont to use metal, leather, and bone weaponry to maximize their destructive potential.

Their preference for fighting at close quarters makes negotiating distances an absolute necessity. Many among them accomplish this by avoiding burdensome armor, allowing for maximum mobility while they move in for the kill.

Pugilists attack with hora and knuckle-dusters, and are as such close-quarters melee attackers. Their positioning plays a pivotal role in battle, with some of their weaponskills increasing their power or guaranteeing a critical hit when delivered at the side or back of their target.

Pugilists do not follow the same combo system as the other Disciplines of War, and instead they can perform attacks based on what battle form they are currently in. Most weaponskills require the Pugilist to be in a particular battle form (each of which is considered a self-buff granted by an appropriate weaponskill), and executing them will allow them to change into another form. Whenever a Pugilist cycles through the raptor, coeurl and opo-opo forms, they gain the status Greased Lightning, which improves their attack power and skill-speed. Due to this form-based combat style, while they still have deined chains of weaponskills, they have some freedom in how they begin such chains, and if they miss an attack they do not have to completely restart the skillchain. Later levels allow the Adventurer to stack the Greased Lightning status, making the Pugilist even more powerful.

Though now under Garlean rule, the city-state of Ala Mhigo once boasted the greatest military might of all Eorzea. Among its standing armies were the monks—ascetic warriors as dreaded by foes on the field of battle as the city-state's great pikemen.

The monks comprised an order known as the Fist of Rhalgr, and it was to this god—the Destroyer—that they devoted their lives of worship. By mastering seats of power within the body known as chakra, they are capable of performing extraordinary physical feats.

Retaining the Pugilist's mechanics, Monks differ in their aesthetic and in the quest characters. Monks place more emphasis on the "chakra" and elements of meditation, than the typical close-quarters combat arts. Monks are also seen wearing specific uniform, which is often colorful.

The Adventurer begins the questline after speaking to the Pugilist Guild's guild receptionist Gagaruna, who directs them towards Hamon. Hamon is initially delighted to train the Adventurer, and has them train alongside his other pupil, Chuchuto Brightstar. Later, Hamon and the two encounter Hamon's former apprentice Rurukuta Tornstar, who humiliates Hamon by proving him a shadow of his former glory, and discourages him from continuing to fight. Chuchuto encourages the Adventurer to face Hamon in combat in order to help Hamon regain his strength, and after a few rounds, Hamon regains confidence. The group defeats Hamon's old adversary and crime syndicate kingpin, Weggfarr Wideaxe, and Hamon congratulates the Adventurer on their progress.

Speaking with Erik, the Warrior of Light learns that Widargelt intends to rebuild the Fist of Rhalgr with a new generation of monks. He introduces the Adventurer to two of his new pupils, D'zentsa and O'tchakha, a pair of Miqo'te orphans who turned up to learn from him out of the blue. Widargelt is attacked by a group of unidentified monks, and unlocked a new chakra not previously known about during the fight.

D'zentsa and O'tchakha reveal they are a part of the Sect of Shadow, and are using Widargelt and the Adventurer to unlock their light chakra. Widargelt and the Adventurer try to get D'zentsa and O'tchakha to cooperate rather than have their sects fight one another, but they refuse. The two later find O'tchakha on death's door. She explains that their master and father figure, a man named H'raha Tia, forced her and D'zentsa to fight to the death. Though she avoided being killed, she now fears for D'zentsa, who is still under H'raha's mercy. O'tchakha works with the Adventurer and Widargelt to try to unlock their chakra by working together so that they might rescue D'zentsa.

The Pugilist class is defined by wielding hora or knuckle-dusters. Functionally, they are similar to Rogue's daggers in that they are equipped as two-handed but are dual-wielded in combat.

In terms of late game armor, Pugilist and Monk wear "Striking" gear sets, which are shared with Rogues and Ninjas up through item level 110. After item level 120, Monk shares it's gear with Samurai. In terms of accessories, they generally share the "Slaying" types with Lancers, Dragoons and Samurai as they add Strength, the Pugilist's primary attribute.

Job Gauges were introduced in 4.0. The Monk has two gauges, The Lightning Gauge and the Chakra Gauge.

The Chakra Gauge shows how many Chakra the Monk currently has open. These are acquired by using Meditation. Once 5 are open, Monks are able to use the Forbidden Chakra and Enlightenment.

Monks' Limit Breaks focus on dealing powerful damage to a single target. Monks have the same Level 1 and Level 2 limit breaks as other Melee DPS classes.

Rockbreaker.
Add a photo to this gallery

Twin Snakes.
Add a photo to this gallery

Pugilist.
Add a photo to this gallery

Artwork for a Hrothgar Monk.

Monk's victory pose.
Add a photo to this gallery

A pair of knuckles.

Arm of the Destroyer.

Six-sided Star.
Add a photo to this gallery

Second Wind.
Add a photo to this gallery

One Ilm Punch.
Add a photo to this gallery