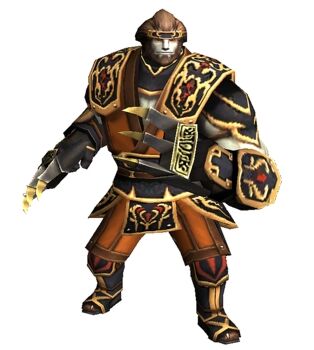 With their bodies that double as deadly weapons, monks attack enemies with explosive strength.

Monk is a basic job in Final Fantasy XI available to players. It is also a common job among beastmen and the job type for all mandragora. Monks excel in hand-to-hand combat; sometimes with their bare fists, but usually by equipping various knuckles and similar hand-to-hand weapons. Monks wear light armor and have very high hit point totals.

In terms of the races of Vana'diel, the Galka, and the Elvaan stand out as the preeminent monks. High strength for Elvaan make them favorable, while Galka's naturally high HP can make for some ridiculously high HP totals. Combined with high vitality, Galkas make for quite strong monks. The race least suited to being monks is probably the Tarutaru due to their low HP and weaker physical characteristics.

Monk is a basic job that players can choose to level without having completed any quests. A player choosing to start as a Monk will receive a White Belt, the first in a series of 4 belts that can be earned.

For a more in-depth description, see the Monk abilities page 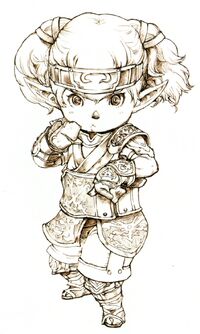 Monks are a very high damaging, versatile job. While they basically do only one type of damage, bludgeoning, and have a relatively low skill for a main weapon, they have access to a great deal of Speed, Strength, and Accuracy bonuses that more than make up for any lack of accuracy naturally.

Until reaching level 70, almost all Monks found in Vana'diel will probably be using Warrior as a subjob. There are many reasons why Warrior is so highly favored, including the fact that Berserk will drastically increase damage over time and it stacks with Monk's Boost ability for extra Weapon Skill damage. Provoke makes them good at being a "SATA" partner or as an off-tank if things go wrong. Double Attack provides an extra increase in damage.

After level 70, the Ninja subjob takes off in popularity, if only because of the advent of "Bones Parties" and other "TP-Burn" style parties where rather than having a tank, hate can bounce between party members freely, all of whom have blink through Utsusemi.

A few Monk players prefer a moderate drop in damage over time to do more so-called "spike damage", which refers to damage dealt in an an instant, usually because of Sneak Attack and/or Trick Attack. To facilitate this, the player must use Thief as a subjob. 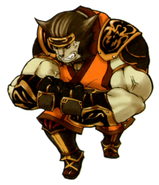 Promotional artwork of the Monk job class by Yuzuki Ikeda.

A Mithra Monk in Artifact Armor.