The Monk is a job in Final Fantasy V obtained after the Wind Crystal shatters. It is the strongest of the light armor-wearing jobs, possessing the highest Stamina modifier, and is tied with the Gladiator for highest Strength, making mastery of Monk important for using Freelancer and Mime late game.

Monks are among the cheapest jobs to buy for, as they do not have a need to equip weapons or many armor pieces. The downside is that Monks lack in Defense, but make up for this with high HP.

Mastering the Monk job on all characters in the mobile and Steam versions earns the player the achievement "Don't Think, Feel!", the name being a a reference to martial artist and actor Bruce Lee.

The Monk class gives party members more unique clothes than other jobs with a Far Eastern flair. Bartz wears a headband, a green vest and pink trousers. Lenna wears a red dress similar to a Chinese qipao and wears her hair in the odango fashion, similar to Ursula's in Final Fantasy IV: The After Years. Faris wears a white gi with red outlines, while Galuf goes shirtless while wearing a red belt and black trousers. Krile wears a red dress similar to Lenna's, but also with white pants and a bow in her hair.

The Monk, the White Mage and the Oracle are the only jobs that cannot equip knives, as there is no "Equip Knives" ability. The only knife they can use is the Man-Eater if they first equip the "Equip Ribbons" ability gained from the Dancer.

The monk's job command launches a flying kick at all enemies for minor damage. In the mobile version, it deals full damage to and from back row. This is the only job command in the game that cannot be learned by leveling up the job, and thus can only be used as a Monk, or as another job mimicking it. If the Monk is attacked physically, Counter will cause the monk to attack the attacking enemy back. Barehanded is the monk's trademark ability, allowing a character to have high attack power while not having anything equipped.

Focus removes any random spellcasting and special abilities of weapons. Any weapons that deal damage based on Magic, such as rods and the Blood Sword, do not get damage boosts from using Focus. Spellblade effects as well as critical hits (this also includes MP-based criticals) still work as normal. Barehanded gives the character base Freelancer Strength + 26. Chakra has a base spell power of 30. Counter has a 50% chance of activating, and will never activate special commands, such as the abilities of the Thief Knife or Chicken Knife, and the Twin Lance will only hit once rather than twice.

The Monk's job command, Kick, cannot be used by other jobs, but its innate support abilities, Barehanded and Counter, can be equipped on the character's other jobs after leveling up as a Monk.

The Monk appears as a character card.

The Monk appears on a Triple Triad card in the version available via Final Fantasy Portal App. 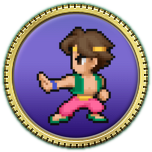 Achievement icon in the iOS version.