Monks are very resilient melee fighters. Their Retaliate ability allows them to counterattack while on the defensive.

The bearer of this certificate has demonstrated supreme proficiency in the martial arts and is deemed worthy of the title of Master Monk.

The Monk is a job class in Final Fantasy III. It is gained from the Wind Crystal. Monks are highly proficient in the martial arts. Although they are only able to equip claws and knuckles, they are highly adept at using their bare hands in combat. Armor selection is also limited. The amount of damage dealt to the target depends on the type of enemy, ranging from large to small amounts. A Monk's attack power when fighting with bare hands is equal to Job Level x2.

The Monk has no special command. Depending on their Job Level, they get a boost from just physically attacking with no weapons equipped. Once the Black Belt (Karateka) job is unlocked, this job loses its usefulness.

When Retaliate is chosen, the Monk will counterattack for 2x damage if they are hit until their next turn, and will also increase their defense for the turn it is used by an amount equal to their current Defense + Job Level. Works on multiple enemies.

In the Pixel Remaster version, Monk can only equip the Nunchaku for weapons.

Sprite of Refia as a Monk. 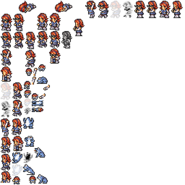 Ingus as a Monk appears on a Triple Triad card in Final Fantasy Portal App.

Arc as a Monk.

Refia as a Monk.