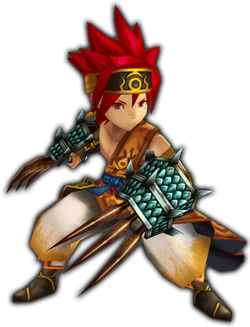 While Monks have low defense, they overwhelm their foes with ferocious physical blows.

Monk (モンク, Monku?) is one of the jobs available in Final Fantasy Explorers.

The Monk is unlocked after the 1★ Tutorial Quest, "Ability Mutations Exam". It can be mastered by completing any 10 quests, then the 5★ quest "Mastery Trials: Monk".

Monks are a damager-type job, it has high HP and Strength, but low physical defense. It is suited for the fast-paced strength of fighting with knuckles. The Monk can initially equip Knuckles. When mastered they can also equip Katana and Clubs.

Their unique ability is Boost, which increases physical attack; holding down the button further increases the attack increase. Their standard ability is Inner Peace, which prevents them from being knocked back from all but the strongest enemy attacks.