Intro: Defeat Barras and Holly at the Lake to the Southwest of Caldisla

A in HP, STR
See stats

With high HP and strong attack abilities, these contemplative combatants find inner peace by taking pieces out of enemies.

The Monk is a job in Bravely Default. It is obtained after defeating Barras Lehr and Holly Whyte at the western lake near Caldisla during the Intro.

The Monk specializes in fighting unarmed and with knuckle-type weapons, and all other aptitudes are medium to low. The Monk's HP and physical attack are its best stats, with abilities that can further increase HP and/or attack damage. The Monk's main skillset is Martial Arts.

Tiz and Ringabel wear navy blue shorts over orange leggings with a white shirt that only covers their chests and a brown band around their torsos. They have brown and grey gloves and brown boots.

Agnès and Edea wear sleeveless robes folded over the right side and tied with a sash around the waist. Agnès wears orange with a white sash and black socks and white ankle boots. She has black gloves and a black headband. Edea wears white with an orange sash with knee-high boots and has her hair in pigtails. She has black gloves with large rings on each wrist.

It should be noted that with their specialty, Knuckle Lore, the Monk gains a physical attack bonus equal to twice their level when they have no weapon equipped. This means that at certain points in the game, unarmed attacks can be superior to any of the available weapons. From level 95 onwards, no weapon in the game gives a bigger physical attack bonus than empty handed attacks with Knuckle Lore.

The Monk's specialty is Knuckle Lore. Its job command is Martial Arts, which includes numerous offensive techniques that deal increased damage to opponents.

Agnès as a Monk. 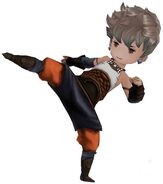 Tiz as a Monk.

Edea as a Monk.

Barras, holder of the Monk asterisk.
Add a photo to this gallery