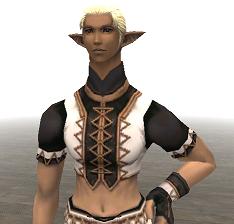 Dr. Monberaux is a supporting character to the plot of Chains of Promathia. To begin, he runs the clinic where the young boy found in Delkfutt's Tower. He is also a good childhood friend of Wolfgang, the Captain of the Ducal Guard. Later in the story, Monberaux helps Wolfgang remember what's important.